TGS collects well performance data for every well in the United States, Canada, and Mexico, including production history starting in the 1920s and production forecasts tied to completions.

Every active well is forecasted to its economic limit once a month for up-to-date Estimated Ultimate Recovery and remaining oil and gas volumes by well as well as basin- specific type curves.

Data is accessed directly from the SQL server database in the cloud, through Direct Connect, or an API service. Data is available in a multitude of industry-standard export formats.

In a recent interview by the Financial Times, Wil van Loh, CEO of oil and gas investment firm Quantum Energy Partners, paints a dire picture for the U.S. shale industry. Van Loh explains that due to a combination of dense wellbore spacing and large volume frac jobs, shale reservoirs have been permanently degraded. He implies that future unconventional wells will show significantly decreased performance to the extent that it is highly unlikely for U.S. oil production to return to the recent peak of 13 million barrels per day (bpd) in the short term. Economic reasons aside, the challenge appears a technical one constrained by reservoir deliverability due to the way the industry has been drilling shale plays. This hypothesis, if true, has significant implications for energy companies, investors and other stakeholders in U.S unconventionals, as well as more far reaching consequences for the global hydrocarbon demand- supply balance and oil price. With access to the world’s largest library of well and production data, TGS is well positioned to test this hypothesis. Our analysis supports the view that a U.S. shale recovery back to 13 million bpd would indeed be very challenging.

Wellbore interference, also referred to as the “parent- child effect”, as well as general reservoir degradation can substantially decrease the performance of new unconventional wells. A comprehensive Wall Street Journal article last year refered to lower production in the range of 15% to 50%. Using TGS allocated monthly production data for all active U.S. wells, and assuming a 30% decrease for new unconventional wells, even an aggressive increase in horizontal rig count would not bring U.S. oil production back to the recent peak, as shown in Figure 1. Using TGS basin- specific type curves as well as a constant rig count and rig efficiency to forecast new conventional wells, base line production remains fairly constant. However, applying TGS type curves to existing unconventional wells, the decline is much more aggressive, as is expected for shale wells. By the end of 2022 that leaves behind a large gap that can only be filled by ramping up unconventional rig count by a total of 60 rigs per month starting in 2021. The final rig count by the end of 2022 would have to grow to 1,600, which is more than 200 rigs higher than at the peak in 2014. Even then, production would only increase to where it was at the beginning of 2020.

Of course, the optimists and the frackers among us will argue that this analysis is very much a worst case; innovation and ingenuity will always deliver a better outcome! Using a lower performance degradation of only 10% over current unconventional TGS type curves, a slightly more optimistic picture is shown in Figure 2. If new unconventional wells produced at 90% of their current type curve, U.S. oil production could theoretically return to 13 million bpd by the end of 2022. Adding horizontal rigs at a rate of 60 per month starting in 2021 would result in a total of over 26,000 new unconventional wells in 2022, or twice as many as there were in 2019 based on TGS records. Recent well permit counts TGS is tracking for all U.S. wells indicate that operators should have no difficulty finding that amount of drilling locations; the limiting factor would be the availability of horizontal drilling rigs and frac crews. As mentioned above, the required rig count in this case exceeds the 2014 peak. Furthermore, the amount of available liquids- focused frac crews – around 350 at its recent peak in 2019 – would likely not be able to keep up with stimulating those wells to bring them online. 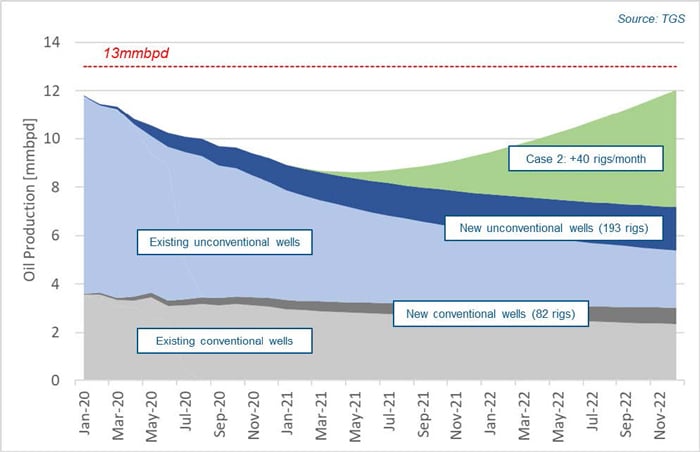 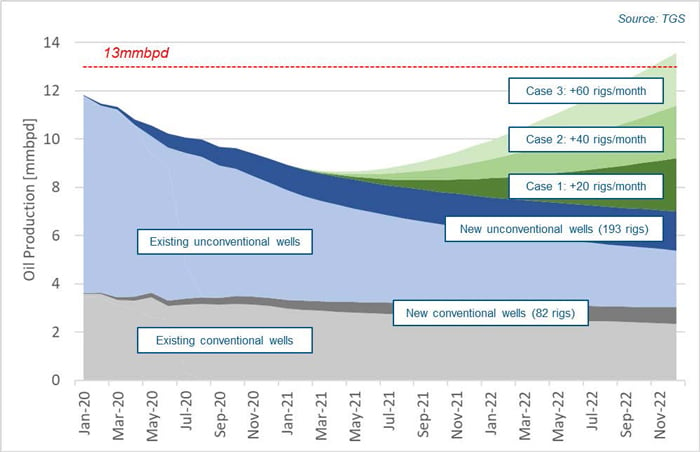 However, the performance of new unconventional wells may not be as badly impeded as assumed in our models. Based on our experience, increased use of analytics has led to better quantification of the relationship between reservoir variables, completion design, and development scenarios. Large amounts of standardized geological and engineering data are being used in multivariate models and machine learning to iteratively optimize well design. Operators are also increasingly using high-resolution 3D seismic and elastic inversion work for wellbore positioning resulting in better frac initiation and overall performance. TGS play type curves that improve year- over-year are further evidence that there is upside in wellbore performance even in the face of drilling locations moving from the core of a basin towards less favorable acreage.

Assuming new unconventional wells did in fact show no degradation in performance – at least the ones drilled over the next two years – and oil prices recovered supporting a ramp up of drilling rigs at a rate of 40 rigs per month starting in 2021 – a more reasonable totalof 1,150 rigs at the end of 2022 – oil production would still not return to 13 million bpd but simply end up slightly higher than where we started this year, as seen in Figure 3. 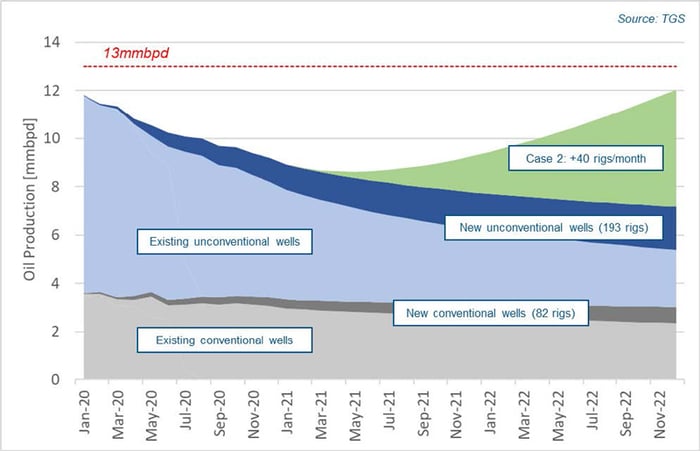 In summary, analysis of TGS data agrees with Mr. van Loh and shows that the production characteristics of shale itself make a return to our recent peak in oil production of 13 million bpd highly unlikely. There is upside from the use of technology and G&G data but it seems capped, at least in the short term. Limitations on deliverability in shale wells highlight the importance of continued investment in offshore exploration and should have favorable implications on the oil price overall. 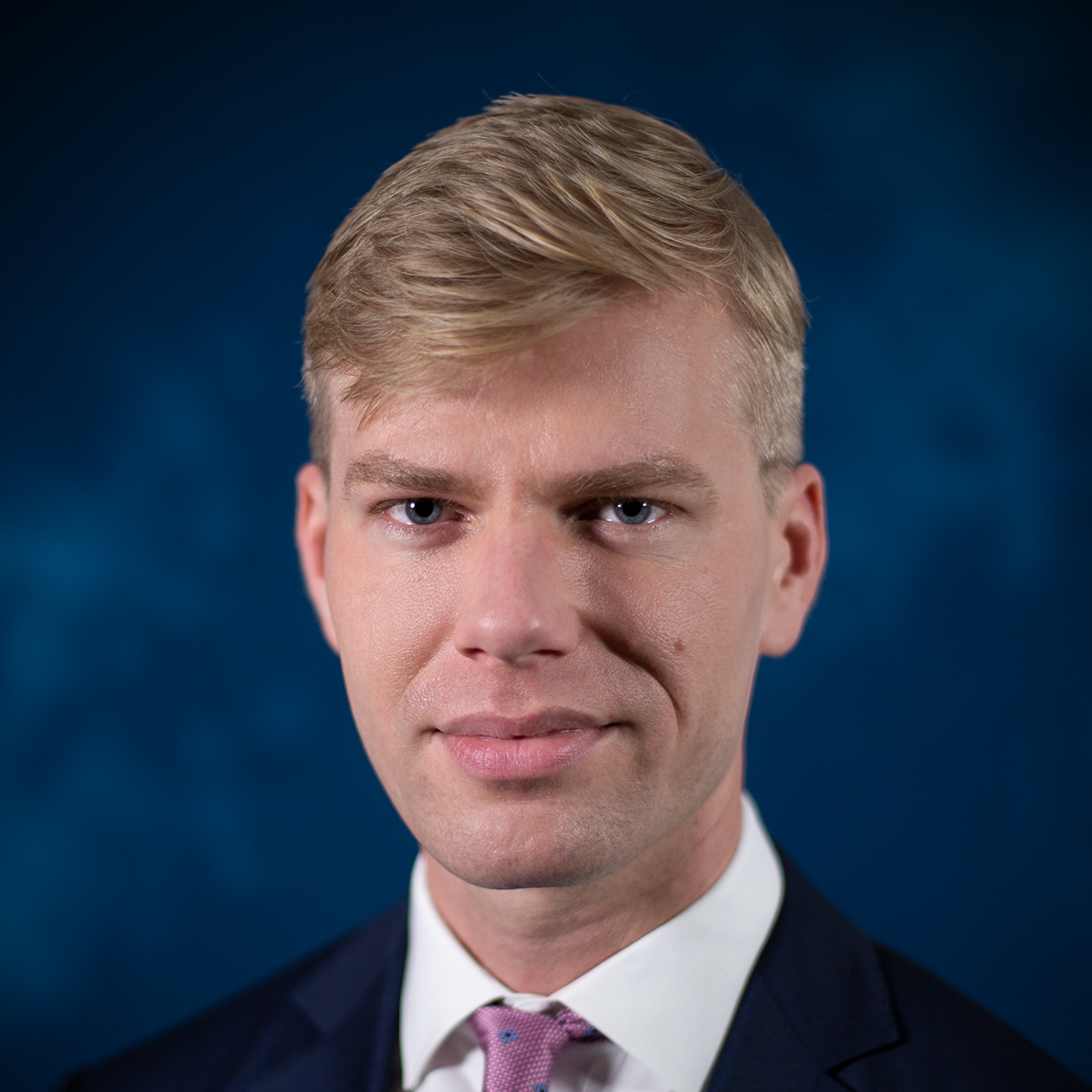