In “Supply Shortage in the Making”, we discussed US oil and gas production outlook in 2021 amid growing concerns of a potential domestic supply shortage. One aspect that will have a direct impact is the handful of executive orders and agency orders the new US presidential administration has issued since the inauguration. How will this new regulatory environment, whether temporary or more permanent, affect domestic production? Let’s take a look at the actual orders.

The Executive Order on Protecting Public Health and the Environment and Restoring Science to Tackle the Climate Crisis1, signed on January 20, revokes the Keystone XL pipeline’s permits and suspended the leasing program in the Arctic National Wildlife Refuge (ANWR). The Department of the Interior simultaneously submitted order 33952, which, among other things, suspended new oil and gas leases and drilling permits on federal lands for 60 days without authorization from any of a handful of new political leaders of the agency. Then, on January 27, the Biden administration issued another executive order, Executive Order on Tackling the Climate Crisis at Home and Abroad3, which further confirmed the suspension of oil and gas permitting and leasing decisions on federal lands and in federal waters pending a comprehensive review.

In summary, it appears that the result of these orders will be to retract authorization for the Keystone XL pipeline, to limit new lease sales on federal lands and federal waters (including GOM and ANWR), and to limit new drilling permits on existing federal leases. Although there is some ambiguity, we will assume that these restrictions will be extended throughout this administration. Importantly, these orders do not appear to impact approved permits to drill on existing federal leases.

Although there are several different agencies that manage federal lands, the Bureau of Land Management (BLM) controls the vast majority of the area and is the agency responsible for managing resources like oil and gas. As of 2019, the BLM estimates that it manages over 244 million acres of land, accounting for over 10% of the total US area4. The Bureau of Safety and Environmental Enforcement (BSEE) and the Bureau of Ocean Energy Management (BOEM) manage resources of the 1.7 Billion acres of US Federal waters5. Figure 1 shows the areas owned and maintained by the BLM, with well spots from federal lands and waters overlaid, based on TGS data.

Drilling intensity trends on federal lands tend to mirror overall domestic US drilling intensity, with a steady decline following drilling peaks in the mid- 2000s. Figure 2 shows a breakdown of federal drilling intensity by state. By 2019, total onshore drilling on federal lands was down to just over two thousand new wells per year. Since 2019, onshore rig rates have plunged off a cliff, falling by over 60%, from over 800 onshore rigs down to a low of 250 rigs before a recent increase back to 400. Even if we assume continued growth in rig rates, it seems unlikely that drilling on federal lands would exceed the 2019 peak. Therefore, the number of outstanding federal permits should be enough to sustain new production for at least the next two years. Figure 3 shows the forecasted production of existing wells along with the expected production from new wells scheduled to be drilled at current rates of drilling intensity. 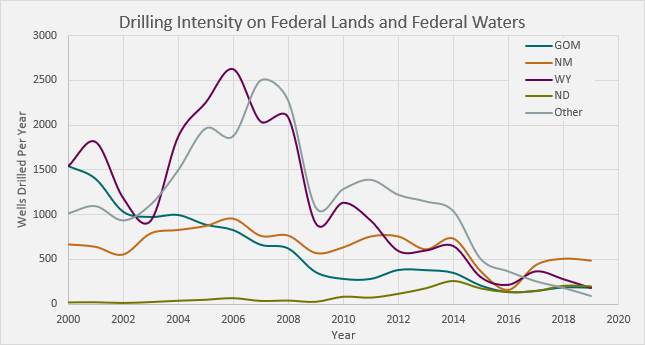 This analysis concludes that although oil production from federal lands and waters is forecasted to decline 44% from 2020 production by 2024, the new administration’s executive orders likely will not contribute to that decline until 2023 at the earliest due to the inventory of drilling permits. The decline in production modeled here is mainly attributable to the continued depression of active drilling rigs, driving the overall domestic forecasted production shortfall described in previous articles. 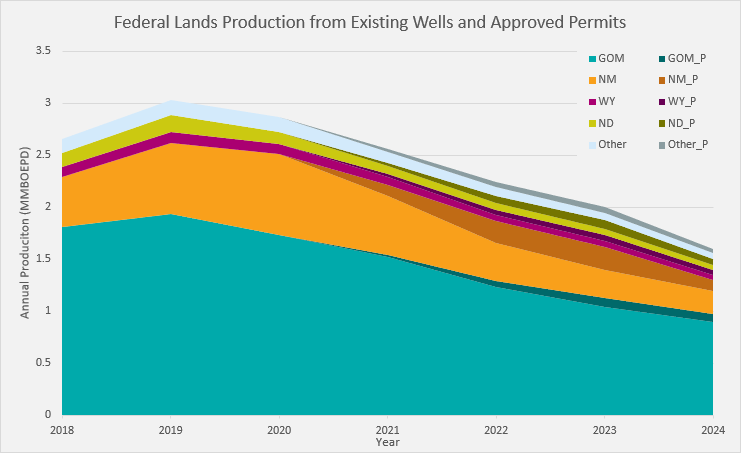