Well Intel: The Impact of Completions Activity on Induced Seismicity

The Heritage Field in Northeast British Columbia has emerged as one of the more successful unconventional plays in Canada. While the field was originally explored in the mid-1980s, development really accelerated during the rise of unconventional plays in the mid-2000s [Fig. 1]. The dominant formation in this unconventional play is the Triassic age Montney Formation. While improvements in unconventional drilling and completions technologies have fueled this growth, the complex structural geology of the region may have also contributed to unintended consequences. Across the continent, many studies have linked unconventional drilling and completion activities to elevated numbers of low-intensity seismic activity, and in 2018 a new project, the Kiskatinaw Seismic Monitoring and Mitigation Area (KSMMA), was initiated across a majority of the Heritage Field to study the impact of unconventional completions in highly fractured reservoirs on induced seismicity. Analysis of TGS production data validates that enhanced completion activity resulted in higher initial production rates across the board [Fig. 2] but indicates that strategic development decisions could potentially reduce induced seismicity by shifting production priorities and strategies.

The Montney Formation is split into three separate members - the upper member (Montney A) is a proximal prodelta facies with laminated siltstone beds, the middle member (Montney B) is a distal prodelta facies with pinstripe light and dark grey laminated siltstone beds, and the lower member (Montney C) a shelf facies with more homogenous dark grey siltstone [ref 1]. A preliminary study of the fault structure by Kryzan and Watson, including operations within the KSMMA, indicate that completions operations in the Upper Montney may produce fewer induced seismicity events than those in the Middle or Lower Montney members [ref 2]. Although these findings are preliminary, it may still be worthwhile to investigate the implications by identifying the production characteristics of the three Montney members. 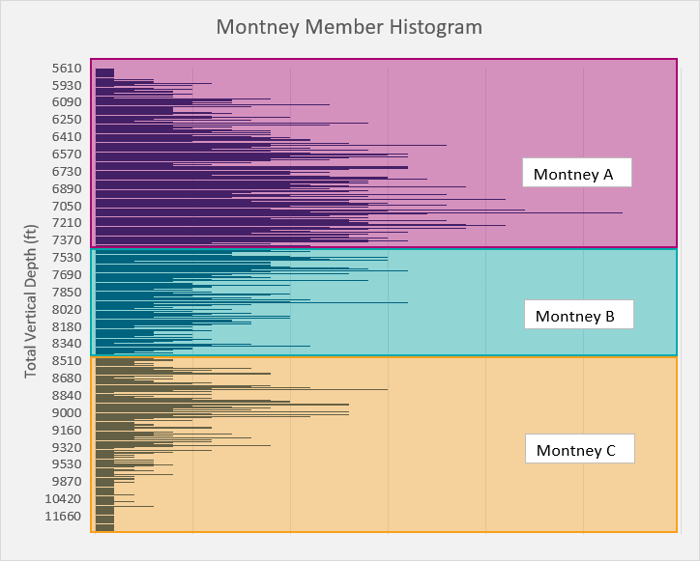 By breaking up the Heritage production into the different Montney members, the production from each member can be characterized and interpreted. Figure 5 shows the KSMMA shape imposed on top of the Heritage Field, with the color of the well spots indicating the producing Montney member. There does appear to be a trend of producing from deeper members of the Montney as you move from the Northeast of the field to the Southwest. As stated previously, although the top of the Montney is level across this field, it appears that the sub-group thickness and boundaries may trend in this direction also, with lower members becoming thicker and pinching out upper members as they move Southwest. Finally, figures 6 & 7 show the oil and gas type curves for the three Montney members. Although Montney B and C average 30-50% higher gas production than the Montney A, the Montney A averages 60-70% higher oil production than either of the two other members. It should also be noted that reporting of condensate production in the area has historically been inconsistent, but when reported is classified as oil by TGS. The preliminary results for this study indicate that completions operations in the liquid-phase reservoir tend to have a lower impact on induced seismicity than in the gas-phase reservoirs. Although there are likely rock properties at play here that will surely be evaluated in future studies, these results raise the possibility that reservoir fluid interactions also play a role in induced seismicity events. 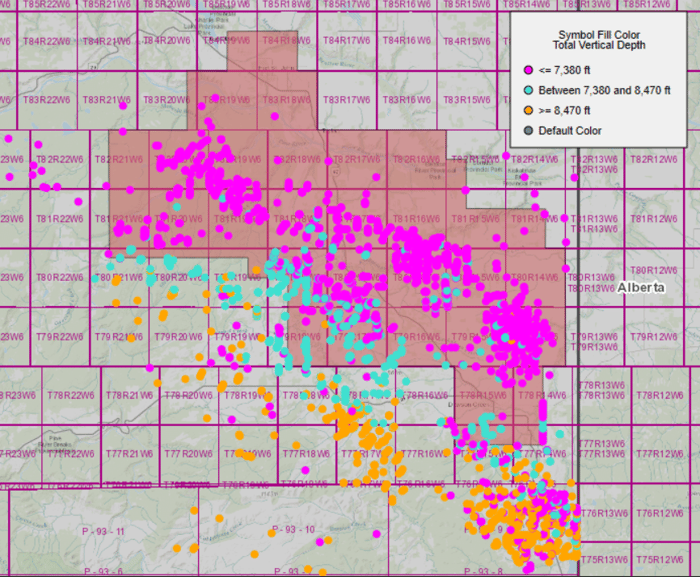