Ammonia Looks to Create a Green - and Blue - Future

As the world seeks new methods to reduce our carbon footprint, it seems clear that not one but multiple solutions will be necessary. While renewable energy sources, carbon capture, hydrogen, and many other technologies are being developed in earnest, one fuel source whose days are yet to arrive is ammonia. But maybe that is about to change.

From Fertilizer to Fuel

As of today, ammonia’s primary use is in the production of fertilizer. However, it requires massive amounts of fossil fuels and accounts for almost two percent of global carbon dioxide emissions. If the world is to use ammonia as a low-carbon fuel, new methodologies through its production and lifecycle must be sought.

The manufacture of ammonia requires nitrogen and hydrogen gases. Often the hydrogen is extracted from natural gas in a process that releases carbon and requires significant amounts of power. Therefore, production using renewables sources - called green ammonia - is beginning to gain traction. As an example of its potential, one company, CF Industries, is a world leader in manufacturing hydrogen and nitrogen products for clean energy, emissions abatement, fertilizer, and other industrial applications. In late 2020, it announced it would install an electrolysis system at a new production facility in Louisiana, USA, to generate carbon-free hydrogen from water to supply to an existing plant enabling the production of green ammonia.

Developing renewables production of ammonia by reducing its associated costs and thus closing the competitiveness gap with fossil fuels will be vital to lowering this chemical’s carbon footprint. However, while initiatives are underway to develop renewables-powered ammonia production, costs are still high and will take time to reduce while new technologies mature. Therefore, an interim solution is needed. Step forward, Blue ammonia.

Blue ammonia is a low-carbon approach to ammonia production which combines traditional ammonia synthesis using natural gas with carbon capture utilization and storage (CCUS). CCUS will ensure that the majority of carbon dioxide is seized during production, then used in various industrial applications – from use as a feedstock to injection into hydrocarbon reservoirs for enhanced oil recovery (EOR).

Saudi Aramco recently announced a landmark blue ammonia project. A shipment of 40 tons of ammonia produced at one of the country’s fertilizer plants was then shipped to Japan to burn ammonia in a power plant alongside coal to generate electricity. Meanwhile, 30 tons of CO2 were supplied to a nearby methanol plant (Ibn-Sina), and 20 tons were captured for EOR at Aramco’s Uthmaniyah field.

As it begins to look like ammonia could become an environmentally-viable chemical, potential new applications are now being investigated. The maritime sector is particularly keen to grasp the opportunity to find a green fuel for the future. This interest is driven by the fact that ammonia has almost twice as much energy as liquid hydrogen by weight and has nine times the energy density of lithium-ion batteries.

As much as 90 percent of all global trade is undertaken through transportation by sea. However, this volume of activity means marine transport produces two percent of global greenhouse gas emissions. The International Maritime Organization (IMO) has set a target to reduce emissions by 50 percent by 2050, from 2008 levels. Hence the reason to look for greener power sources.

By early 2024, Man Energy Solutions, based in Denmark, plans to install an ammonia-ready engine on a vessel. The first models will be dual-fuel, able to run on traditional marine gas oil as well. Meanwhile, Norwegian shipping company, Eidesvik, is working to install ammonia fuel cells on a vessel by the end of 2023. Like batteries, these generate electrical energy to power a motor. Project collaborator, Prototech, has already begun developing a test version.

A wide range of ammonia fuel source applications from industrial power plants to private vehicles has also gained momentum outside the maritime industry. Automobile manufacturers Toyota and Hyundai have been particularly active in research into manufacturing ammonia-hydrogen cars as an alternative to conventional electric vehicles. 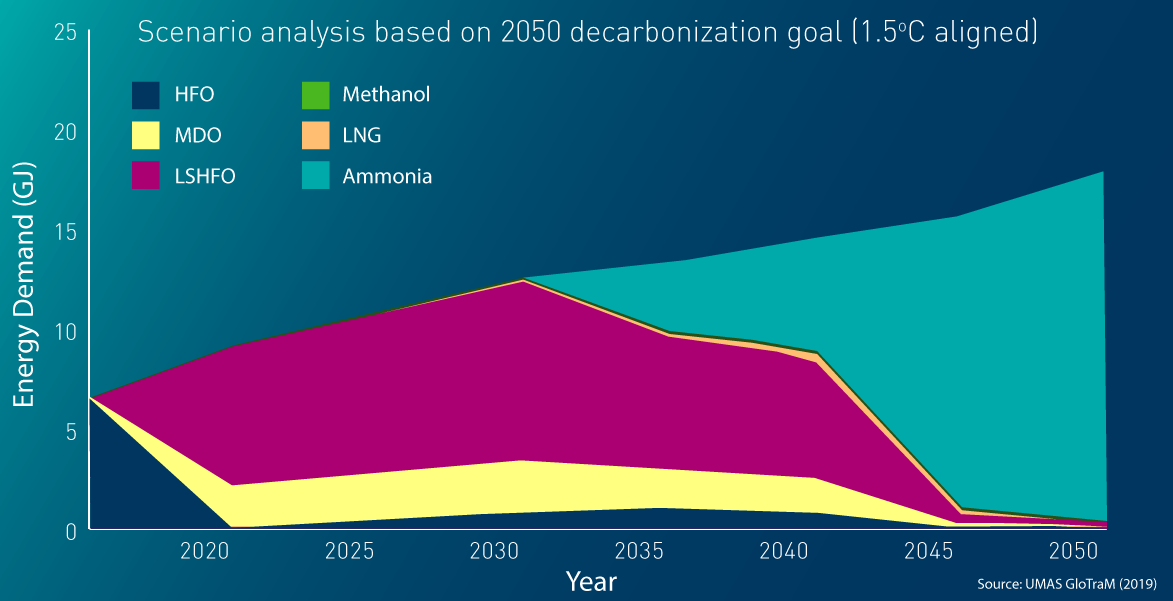 A 2019 paper predicted that green ammonia will play an overwhelmingly important role in the foreseeable future. The report forecasts that if shipping aims to meet Paris Agreement targets, green ammonia will provide nearly the entirety of the fuel mix on international routes by 2050 (Source: UMAS GloTraM)

A Role for the Energy Data Industry

As a seismic data provider, TGS believes that blue ammonia projects that involve CCS can wholly benefit from our subsurface competence to safely store CO2 in offshore reservoirs. Furthermore, they can also benefit from our cost-effective 4D solutions for long-term carbon reservoir monitoring utilizing DAS, P-Cable and the like. We also believe they also need gas delivered in as cost-effective manner as possible, so preferably near existing gas hubs. Using our knowledge of CCS sites near these hubs can be key to achieving this.

There is no doubt that ammonia could be part of the energy mix if the world is to decarbonize heavy industry and transport successfully. Both green and blue ammonia have seen a significant rise in interest due to renewable energy in its production and CCS applications as a by-product. The growth of ammonia use seems assured in the years to come.