Carbon capture and storage – how the UK is meeting the challenge

An increased impetus toward reducing global carbon emissions has generated significant challenges for politicians, scientists and industry leaders alike. To meet this challenge, the global energy industry is embarking on an energy transition by developing new solutions to enable the reduction of carbon emissions associated with the supply of energy and other carbon-producing industries.

Each day, industries around the globe emit almost 100 million metric tons of carbon dioxide (CO2) into the atmosphere so there is a drive to reduce these emissions. As part of the energy transition the development of renewable energy sources – such as wind and solar – are growing rapidly. However, this transition will take time so additional, interim solutions will be necessary. One of the foremost potential solutions include the projects being implemented to capture CO2 gas before it gets released into the atmosphere and instead hold it in reservoirs deep within the Earth – a process known as carbon capture and storage (CCS).

Carbon capture in the UK

EU countries – along with Norway – are at the forefront of CCS Initiatives today. These are both at a national level with the Norwegian feasibility full-chain CCS studies, as well as on EU level through, for example, its upcoming Innovation Fund which could unlock the potential of CCS in Europe. Meanwhile, the UK Government recently set out its low carbon transition plan. As part of this strategy, it recently announced an investment fund of £800m (US$1bn) for CCS infrastructure as the government seeks to establish CCS clusters in two sites in the UK by 2030. The first of these is in the north-east’s Teesside’s industrial cluster. UK Chancellor, Rishi Sunak, stated: “Carbon capture and storage is precisely the kind of exciting technology where Britain can lead the world over the next decade.”

As the CCS industry matures, a new term has been coined that extends the CCS model – CCUS, or carbon capture utilization and storage. In the UK, the CCSA is the trade association promoting the commercial deployment of CCUS technologies. It states that CCUS is a low-carbon solution which captures CO2 from a variety of sources. The CO2 is then transported via pipeline or ship to a permanent and secure storage site, deep under the seabed. Additionally, the CO2 can also be used for a variety of industrial purposes – such as the production of synthetic fuel or in the food and beverage industry. 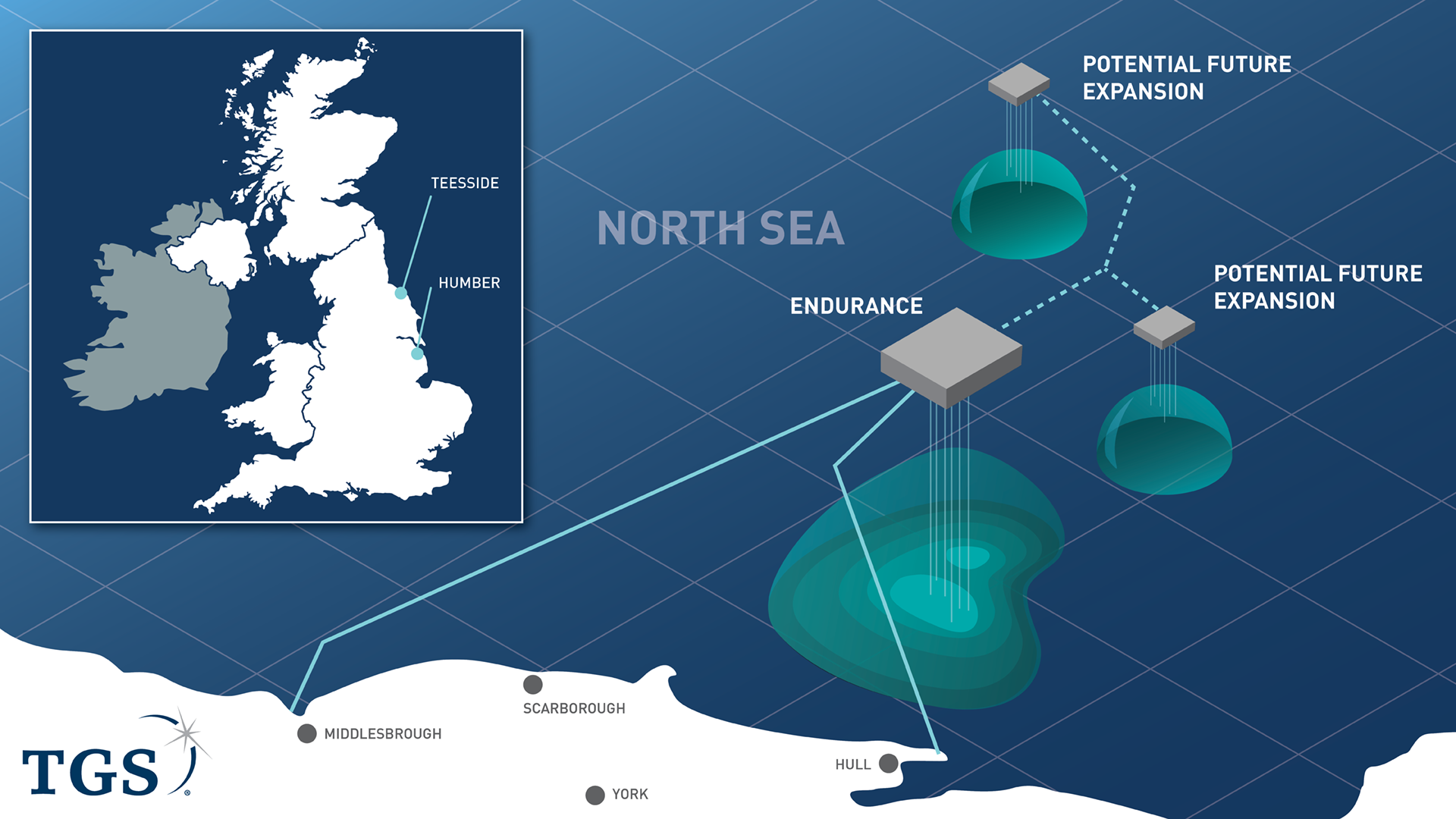 As part of the UK’s drive to further develop its carbon capture industry, in the summer of 2019, the UK government issued a consultation paper entitled “Re-Use of Oil and Gas Assets for Carbon Capture Usage and Storage Projects. The paper sets out how CCUS is likely to play an essential role in meeting the UK’s net zero target. The deployment of CCUS will also be central to supporting the low carbon transformation of the UK’s industrial base.

There is certainly great potential to reduce the costs of deploying CO2 infrastructure through the re-use of appropriate existing oil and gas infrastructure. Re-use sometimes involves re-purposing offshore oil and gas assets, that have reached the end of their commercial life for producing hydrocarbons, to be part of a CCUS transport and storage network. In order to ensure its long-term viability, the use of both existing and future captured seismic data will be required throughout the life of CCUS projects.

As a sign of the exciting CCUS developments in the UK, in October 2020 BP, Eni, Equinor, National Grid, Shell and Total confirmed they have formed a new partnership, the Northern Endurance Partnership (NEP), to develop offshore CO2 transport and storage infrastructure in the UK North Sea, with BP as operator. This infrastructure will serve the proposed Net Zero Teesside (NZT) and Zero Carbon Humber (ZCH) projects that aim to establish the decarbonized industrial clusters in Teesside, as well as a further project in Humberside.

The use of seismic data from TGS in the development of the landmark Teeside net-zero cluster CCUS project is an important initiative for the company as it marks the start of what could become a growing business area in the coming years. TGS recognizes the need to actively engage in projects that support the energy transition and working with Net Zero Teesside is a recognition that its data can and will be used in new ways in the future.

TGS, alongside other energy data specialists, recognizes the contribution it can make to developing a more sustainable energy future. The industry’s geoscience skills and subsurface imaging expertise along with advanced capabilities in deriving insights from their data mean that companies such as TGS will be able to provide actionable insight to organizations as they seek the optimum storage reservoirs for CO2. Additionally, discussions between industry and government are taking place to develop a future framework for geoseismic monitoring timescales to ensure optimum monitoring of reservoirs for thousands of years to come. The subsurface imaging industry is ready to support this framework.

It is clear that the energy data industry will play a significant role in carbon capture projects around the world as this technology seeks to become a cornerstone in the movement toward the reduction of CO2 release.