Recently reported large oil discoveries (Venus-1 and Graff-1) have renewed interest in the prospectivity of the Orange Basin (Figure 1) of Namibia and South Africa. This paper summarises some of the main play concepts and will be showcasing how the two new proven plays help to calibrate the deepwater source rock story and help to guide the identification of analogues with equivalent reservoir, traps, and charge along the margin. 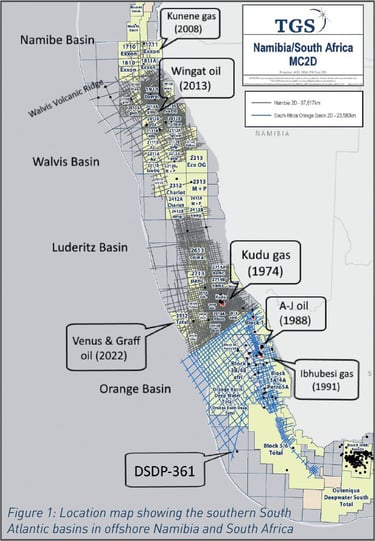 Introduction
The Orange Basin is part of a volcanic-rifted passive margin south of the Walvis Volcanic Ridge, along the southern South Atlantic coast of Namibia and South Africa. The basin formed in the Late Jurassic to Early Cretaceous period, as South America and Africa started to rift apart, creating continental syn-rift half-graben for example, offshore South Africa, where light oil was discovered within the Hauterivian lacustrine and fluvial sandstone reservoirs. Large rift-related half-graben contain thick subaerial flood basalts that were subsequently developed during the transitional phase from the continental rifting to oceanic seafloor spreading. These form a large area of Seaward Dipping Reflectors (SDRs), now measuring more than 5 km thick, regionally visible on seismic data. Similarly, thick SDRs were developed on the conjugate margin offshore southern Brazil, Uruguay, and northern Argentina (McDermott et al, 2018). The thickest part of the subaerial igneous rocks forms a NW-SE trending ridge, known as the Outer High basement ridge (Figure 2). Structurally, the Orange Basin can be divided into two major sub-basins separated by the Outer High basement ridge (Figure 2). The inner sub-basin formed first in a NW-SE direction, possibly in the Neocomian. The outer sub-basin formed later, during the Aptian with the submersion of the SDRs. Although this provided an opening to the sea, the overall environment was still restricted marine as the southern South Atlantic Ocean only began to open in the Early Cretaceous period, creating a narrow ocean. During the break-up phase of the South Atlantic, the young South Atlantic Ocean’s circulation was restricted by the Agulhas-Falkland Fracture Zone, forming the southern limitation, which created anoxic marine conditions in the southern basins. Such a restricted marine environment existed throughout the Barremian to Aptian eras, allowing good quality source rock facies to develop and deposit under anaerobic conditions. In the inner sub-basin, they are referred to as the Kudu Shale Formation.

Hydrocarbon play concepts offshore Namibia and South Africa
The Outer High ridge developed as a regional trend during the deposition of flood basalts and can be mapped from the Walvis Basin to the Orange Basin on 2D seismic data. The Outer High plays an important part in controlling reservoir and source rock distribution and deposition, and is partially responsible for generating many trapping configurations. Hydrocarbon play concepts in the Orange Basin within the vicinity of the Outer High are presented in Figure 2, and in more detail in Figure 3 and 4, as discussed in the following paragraphs. The Early Cretaceous post-rift sequence in the Orange Basin is comprised of a 2.5 km thick section of interbedded carbonates and clastics of likely Barremian age. A thin (20-30 m) Barremian limestone interval recorded at the Kudu wells 1 to 4 has been identified above the Kudu aeolian sand reservoirs, which is part of the SDRs sequence, interbedded with basalts, and below the Late Barremian-Early Aptian Kudu shale source rock (Intawong et al., 2019). The carbonates eventually drown out and onlap on to the Outer High where they form a carbonate platform, which could be reservoirs in the form of shallow marine bioclastic limestones, build-ups, and shoals. Well-defined Albian-aged prograding seismic reflectors have been identified onlapping on the aggrading carbonate platform. These represent an influx of fluvial-deltaic siliclastics, that accumulated inboard of the Outer High basement ridge. The TotalEnergies-operated Venus discovery is located in the outer sub-basin, west of the Outer High. A seismic dip line through the Venus discovery trend is shown in Figure 3. The Aptian reservoir sands were probably sourced from the east and transported across the carbonate platform that sat on top of the Outer High. The Venus reservoir is an Aptian sandstone deposited in the outer sub-basin that ponded in the accommodation space west of the Outer High (Figure 3). The light oil that was recently discovered in the Venus prospect was trapped due to the basin floor fan fairway onlapping onto the Outer High.

The Late Cretaceous evolution of the Orange Basin is strongly characterised by episodic gravitational collapse of the margin. The main gravitational collapse structure is found inboard of the Outer High and characterised by a down-dip contractional domain along a basal detachment of possibly over-pressured Cenomanian-Turonian source rock. This by default creates an up-dip extensional component featuring dipping sediment blocks over listric and normal faults. Late Cretaceous fluvial-deltaic and turbidite sands are attractive potential reservoir targets, such as roll-over anticlines within the extensional domain and toe-thrusts within the contractional domain. The Orange Basin Cretaceous section above the Cenomanian detachment has suffered a structural collapse towards the west, creating multiple toe-thrust imbricate structures...