Since 2003, Australia has dedicated almost $4 billion to developing Carbon Capture and Storage (CCS) technology in an approach to fight climate change with technical advancements instead of raising taxes. This approach has been attributed to Australia’s 20.8% reduction of emissions from 2005 levels and projections for 2030 to be near 35%, a number well above the target set at 27%.

The Australian Government has identified CCS as a priority low emissions technology in its 2020 Technology Investment Roadmap: First Low Emissions Technology Statement. This has been further underscored by the inclusion of CCS in the Emissions Reduction Fund which provides the first financial incentive scheme for CCS in the Asia Pacific region.

CCS technology has been advancing since the 1970s. It is a technology that has traditionally been used to recover residual oil from tight or depleted reservoirs. This early development as a tool to maximize oil recovery also illustrated the positive environmental potential to trap CO2 in the reservoir in which it was injected. More recently, the technology is sought after to help capture and store the CO2 emissions of coal and gas-burning power plants as well as the emissions generated from heavy industries making concrete and steel where it has been difficult to implement CCS solutions.

To maximize the potential of CO2 storage, capturing technologies had to be developed at various scales to work efficiently at a multitude of industrial and manufacturing facilities. This engineering feat is now in its final development stages. Australia has trial sites in Queensland and South Australia that show enormous promise to capture and store CO2 emissions created by the coal industry as well as the steel and concrete industries.

The largest CCS facility in Australia is Chevron’s Gorgon LNG Project, designed to inject up to 4 million tonnes of CO2 a year. Gorgon CCS had some initial development delays and became active in August 2019, storing over 5.5 tonnes of CO2 from commencement.

The Offshore Petroleum and Greenhouse Gas Storage Act 2006 established a system to assess and permit areas for CO2 storage. The government held its first two acreage release rounds in 2009 and 2014. In June of 2021 the Australian government asked industry companies to nominate areas they would like to explore to store CO2, and on December 6th the areas were announced to potential bidders.

Final submissions for work-bid applications are due March 4th to March 10, 2021. Applicants will need to perform a detailed assessment of the work they will perform to determine the suitability of each storage area. These assessments are required to contain all proposed engineering enhancements for injection as well as characterizing geological and geotechnical characteristics of the formations that may influence the storage potential of the reservoir.

In addition to the technical evaluation concerning the storage potential of various formations within the lease area, the applicants are also required to provide environmental assessments to mitigate any interference with fishing or other nautical navigation and to propose strategies to conserve the marine geography and ecology.

Five areas are available for CO2 storage exploration. Two areas are in the Bonaparte Basin’s Petrel Sub-basin offshore the Northern Territory. The other three areas are in offshore Western Australia, one in the Browse Basin and two in the North Carnavon Basin. 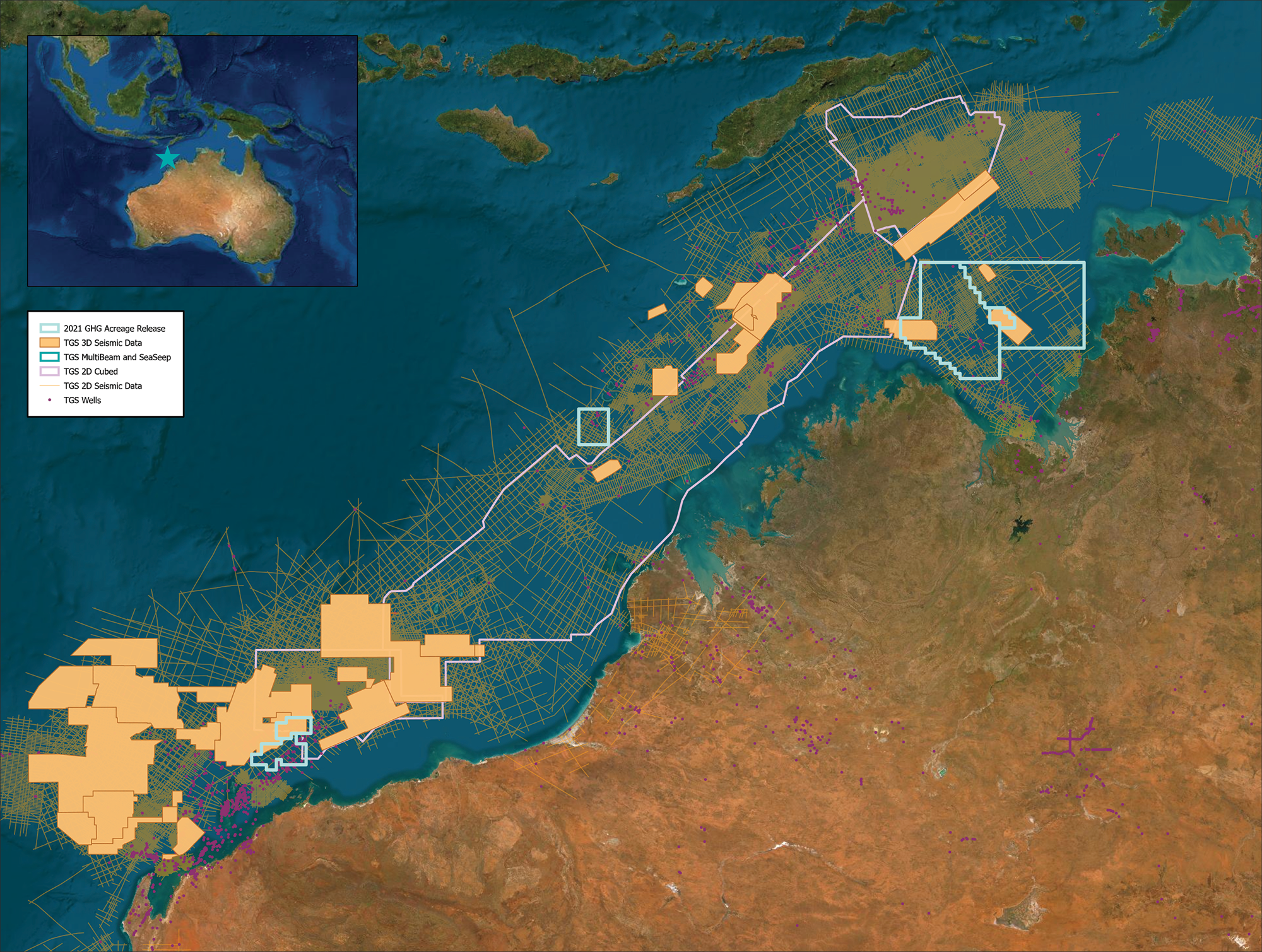 The Petrel Sub-basin is a promising site for CO2 storage due to its proximity to carbon-intensive industries and favorable geology. Geoscience Australia has estimated a total effective CO2 storage capacity of 15.9 gigatonnes within Cretaceous and Jurassic Saline Reservoir-Seal pairs.

The section from a type well in the figure below shows the most likely candidates for CCS in the Bonaparte Basin, including the Plover, Elang and Sandpiper Formations – the clean, blocky nature of the sands is witnessed by the wireline character. The encasing and interbedded shales are expected to form the sealing units required to contain the sequestered carbon. 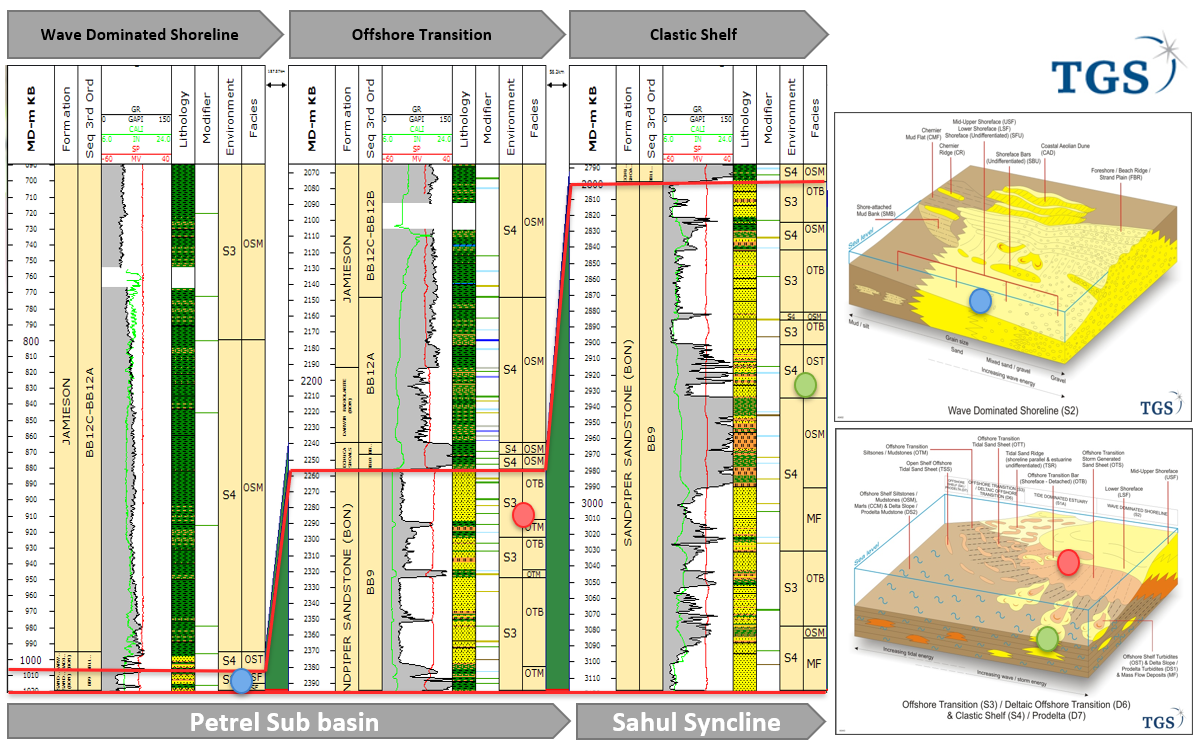 The Dampier Sub-basin, within the North Carnarvon Basin, has been identified as another promising site for CO2 storage. TGS' Olympus 3D Reprocessed data provides high-resolution imaging covering several depleted fields that produced hydrocarbon from the Late Jurassic Angel Formation sandstones. The Angel Formation is age equivalent to the nearby Dupuy Formation that supplies the reservoir for Chevron’s Gorgon CCS facility.

Existing infrastructure and a detailed understanding of these traps and reservoirs combined with modern 3D reprocessing make this an attractive area for future CCS projects.

Data – The Key to a Winning Assessment

Decades of oil and gas exploration have led to the acquisition of vast volumes of subsurface seismic and well data. Recently, attention has shifted to leveraging these data to evaluate the subsurface to identify potential CCS sites. Strong parallels exist between hydrocarbon exploration workflows and the identification of suitable CCS sites. In both cases, a detailed understanding of historical wells is crucial to evaluate a potential site.

To perform a robust assessment of the potential acreage and offer a winning bid it is necessary to review all available well data and integrate it with modern or reprocessed seismic data. A detailed geological model can be built from the data to accurately predict the intensity and extent of geotechnical properties to locate potential injection sites.

Service companies like TGS have existing datasets, to supplement and advance the data provided by Geoscience Australia. An example is the TGS Facies Map Browser (FMB), The FMB study provides a detailed interpretation of well data, including wireline, biostratigraphy and core information. This data is tied to a regional seismic interpretation to derive a stratigraphic model and depositional environment maps.

These types of studies provide potential bidders with a resource that will complement their existing data and accelerate their interpretation. Allowing them to create detailed reservoir quality and storage evaluations within the minimal time they are allotted to process the work evaluations needed for each lease area.

Seismic data is an essential tool used to provide evidence of reservoir capability and storage capacity. Modern 3D seismic is also necessary to provide mechanic constraints for modeling that can be used to simulate and determine the most efficient engineering parameters to maximize the storage potential. TGS has the Olympus, Petrelex, Zeekoet and Zenaide 3D datasets available to assist potential assessments.

Australia has been a leader in promoting a regulatory environment that advances the technology needed to achieve its emission reduction goals. The strategy to invest $4 billion in CCS technology and research for the past 15 years is finally paying off. In 2020 alone Australia’s CO2 emissions fell 5%. Australia’s attention to finding solutions for capturing and storing CO2 from various manufacturing and energy-creating industries is creating scalable technology that is anticipated to exceed their emissions reduction goals for 2030 from 27% to 35%.

CCS can make a significant contribution to a sustainable, economically viable, and integrated energy system. High-quality subsurface data solutions and geoscience expertise is igniting the technical success of CCS. Chevron’s Gorgon LNG CCS plant is a great example of a scalable solution that, after a delayed start, is reaping rewards.

The current momentum generated from new solutions emerging to reduce and store CO2 from the steel and concrete heavy industries, coal and gas-burning power generation facilities, and the hydrocarbon industry is encouraging. These advancements are empowering stakeholders such as regulators, investors, industrial partnerships, and the public to ensure the successful adoption of CCS in Australia.

The 2021 offshore CCS acreage release is a promising step that will provide new areas for offsetting future emissions and will make reaching net-zero an achievable goal.