Offshore Windfarm Developments Take Hold in the US

For a country with such a significant hydrocarbon industry, is it any wonder that other sources of power production in the US have taken a backseat in comparison to many other developed nations? Despite a significant downsizing of the industry during 2020, the US oil and gas sector still employs about 600,000 workers and contributes around $1.5 trillion towards the US gross domestic product. Production of oil and gas hit record levels in 2019, with natural gas production exceeding 100,000 million cubic feet per day and crude oil exceeding 12,000,000 barrels per day.

However, the tide is beginning to turn.

In 2016, five offshore wind turbines off Block Island, Rhode Island, began to spin, producing 30 MW of electricity. To date, this is still the only offshore wind farm in US waters. But that situation is about to change dramatically.

According to the US Department of Energy, offshore wind has the potential to generate more than 2,000 GW of capacity each year in the country, which amounts to almost double the current level of electricity use. Though only a small fraction of this figure is likely to be realized in the coming decade, the potential is there for offshore wind energy to be powering many millions of homes across the country.

As of early 2021, there are upwards of a dozen offshore projects in progress – and not just in the historic heartland of offshore wind, New England. The mid-Atlantic, stretching from New York down to Virginia, has developed to become the largest regional market in the US.

However, the industry hasn’t had it all its own way recently. In late 2020, Vineyard Wind temporarily withdrew its application for federal approval to build the first large US offshore wind farm, about 15 miles off the coast of Martha’s Vineyard, Massachusetts. The consortium stated it needed more time to undertake a final technical review following a change in the turbines expected to be used for the project. With approval anticipated in 2021, any lost momentum for the industry is expected to be speedily recovered.

Meanwhile, the single biggest factor affecting the growth of the industry – economics – has been moving in the right direction, of late. Between 2012 and 2018, costs reduced by over 60 percent. During 2020, it emerged that Mayflower Wind, a development owned by Shell and Ocean Winds, will sell power into Massachusetts from its 804 MW project for around $58 per megawatt-hour on a levelized basis. This is 13 percent below Vineyard’s levelized price, which was considered the financial benchmark back in 2018. Essentially, this means that as costs reduce year-on-year, operators of these projects can expect consistent profit margins, furthering the attractiveness of the offshore wind power sector.

The new US administration has provided an immediate fillip to its wind-based renewables industry. In the first weeks of his presidency, the Biden administration signed a number of executive orders prioritizing combating climate change. Within the orders, the administration plans to move the United States to 100 percent green electricity by 2035, up from 38 percent at present. Previously, the offshore wind industry has struggled to obtain necessary permits in a timely fashion. The new orders will review the permit process and evaluate how the US can double its offshore wind output in the coming years. 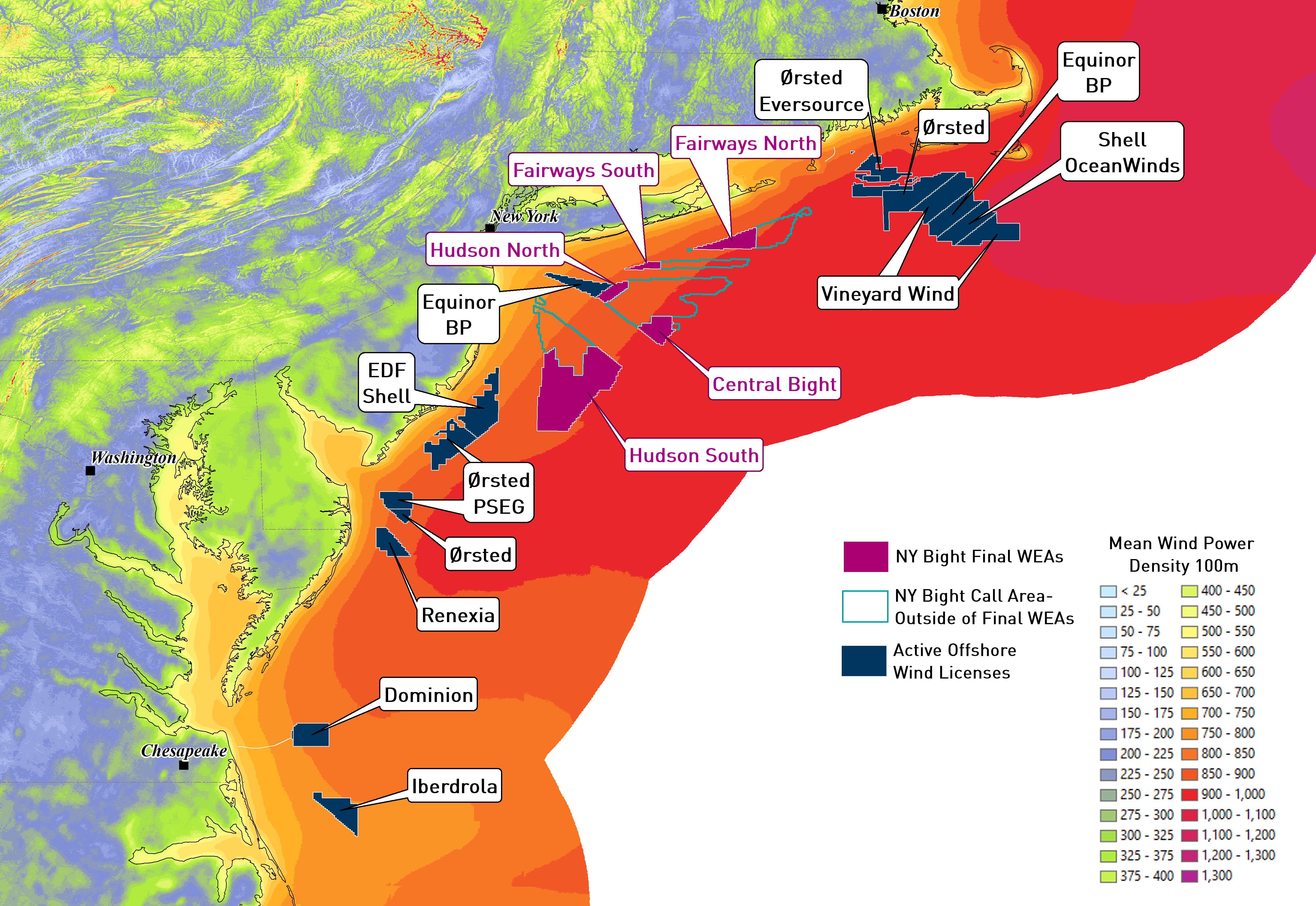 The first tangible example of the new positive environment for offshore wind in the US was the announcement on 29th March by the Biden administration to vastly expand offshore wind power use along the East Coast of the country. The government plan designates an area between Long Island and New Jersey as a priority offshore wind zone to establish 30 GW of offshore wind turbines in coastal waters nationwide by 2030. The administration has confirmed it will accelerate permitting for projects off the Atlantic coast, offer $3 billion in federal loan guarantees for offshore wind projects, and upgrade ports to support wind construction activities.

Following the announcement, Jen Psaki, the White House press secretary, stated: “The president recognizes that a thriving offshore wind industry will drive new jobs and economic opportunity up and down the Atlantic coast and the Gulf of Mexico and in Pacific waters.”

Further development on the west coast of the US involves the introduction of a new Bill in the state of Oregon to establish a task force on floating wind energy and enable the development of 3 GW of commercial-scale floating wind projects within federal waters off Oregon’s coast by 2030.

This could be just the start for floating wind energy projects. Research company, Aegir Insights, forecasts a build-out of floating offshore wind capacity of between 6 GW and 11 GW by 2035 in California, Oregon, Hawaii, Michigan, New York, and Maine, with the base case giving a result of 9 GW.

Support from the Oil & Gas Sector

As the offshore wind industry gears up for growth, the US can certainly look to the offshore oil & gas sector to aid its development. Most obviously, seismic companies have decades of data and knowledge of the geology offshore US. Whether fixed or floating turbine solutions for offshore wind projects, seismic and other geophysical imaging techniques will play a big part in determining all constriction requirements.

One of the greatest challenges yet to face the offshore wind industry will be sourcing the right expertise to design and build the necessary structures. This issue is particularly true when you look at the number of projects looking to be executed at the same time or within a 12 to 24 month period. The answer will surely come from the offshore oil & gas sector – especially as it has been hit so hard by the recent industry downturn, leaving a highly technical and capable workforce available to support offshore wind projects.

With the recent downturn in the offshore oil & gas sector, combined with both federal authorities and end-user consumers’ desire to make renewables a greater part of the energy mix, it seems that the next decade will belong to offshore wind projects. The momentum is also there from oil & gas companies driving their own transition to fully fledged energy businesses and looking to wind power to form part of their portfolio.

Until now, the US has been behind the curve as the offshore wind power industry in Europe and Asia has moved forward. But the signs are there that growth will now come soon and come fast. With both technology and experience, there are opportunities for foreign players to support this exciting growth – particularly through partnerships. So it may not be long before the perception of the US as an emerging wind market is replaced by one of a leader in offshore wind power generation.