Jason Robinson, Felicia Winter and Anongporn Intawong analyse the recent Venus and Graff discoveries offshore Namibia and discuss the implications for oil exploration in the region.

The recent Venus and Graff oil discoveries have renewed interest in the prospectivity of the Orange Basin, offshore Namibia and South Africa. These two new proven plays calibrate the deepwater source rock story and help guide the identification of analogues along the margin with equivalent reservoir, traps, and charge scenarios. 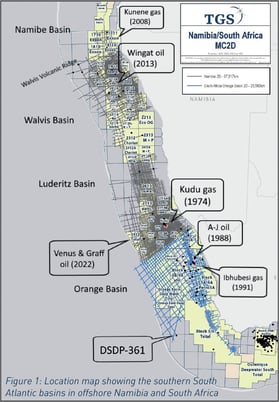 The Orange Basin Offshore Namibia and South Africa
The Orange Basin is part of the volcanic-rifted passive margin south of the Walvis Volcanic Ridge along the southern South Atlantic coast of Namibia and South Africa. The basin formed in the Late Jurassic to Early Cretaceous period, as South America and Africa started to rift apart, forming continental syn-rift half-graben. The Orange Basin can be divided into two major sub-basins separated by the Outer High basement ridge (Foldout), thick subaerial flood basalts that form a large area of Seaward Dipping Reflectors (SDRs) measuring more than 5 km thickness. The inner sub-basin formed first, in a NW–SE direction, possibly in the Neocomian era. The outer sub-basin formed later, during the Aptian, with the submersion of the SDRs. The rifting provided an environment for the young South Atlantic Ocean where circulation was restricted creating anoxic marine conditions in the Barremian to Aptian eras, allowing good quality source rock facies to develop and deposit under anaerobic conditions. In the inner sub-basin, they are referred to as the Kudu Shale Formation.

Hydrocarbon play concepts offshore Namibia and South Africa
The Venus discovery is in the outer sub-basin, as shown in a seismic dip line in Figure 1 (below). The trapping mechanism of Venus is the basin floor fan fairway onlapping onto the Outer High. The Outer High plays an important part in controlling reservoir and source rock distribution and deposition and is also responsiblefor generating many other trapping configurations. Barremian-aged carbonates inboard drowned out during the sag phase but formed carbonate platforms on the Outer High. These can also be reservoirs in the form of shallow marine bioclastic limestones, build-ups, and shoals. The Venus reservoir Aptian sands were probably sourced from the inboard basin in the east and transported across the carbonate platform on the Outer High, to be deposited in the outer sub-basin, ponding in the accommodation space down-dip.

Figure 1: SW–NE dip line through the Venus-1 structure; basin floor fan fairway sitting on Aptian source rock in the outer sub-basin west of the SDR basement high. The reservoir is onlapping onto the high, creating the Venus trap, which trapped the light oil discovered in 2022 by TotalEnergies.

The Shell-operated Graff-1 discovery in the inner sub-basin, shown on Figure 2, is of Late Cretaceous age (possibly Campanian to Santonian) and is buried approximately 2.5 km below mudline. The trap appears to be a stratigraphic sub-thrust trap developed at the outboard extent of the Late Cretaceous toe-thrust structures – which developed due to episodic gravitational collapse along the margin. The Outer High has probably played an important role for this trap, acting as a  backstop causing turbidite sands to pond east of the High. The Outer High also seems to control the westerly extent of the Late Cretaceous toe-thrust imbricates. Some untested plays are the compressional toe-thrust structures of the Orange Basin’s gravitationally driven system and the large roll-over structures of the extensional domain inboard of the same gravity-driven system. 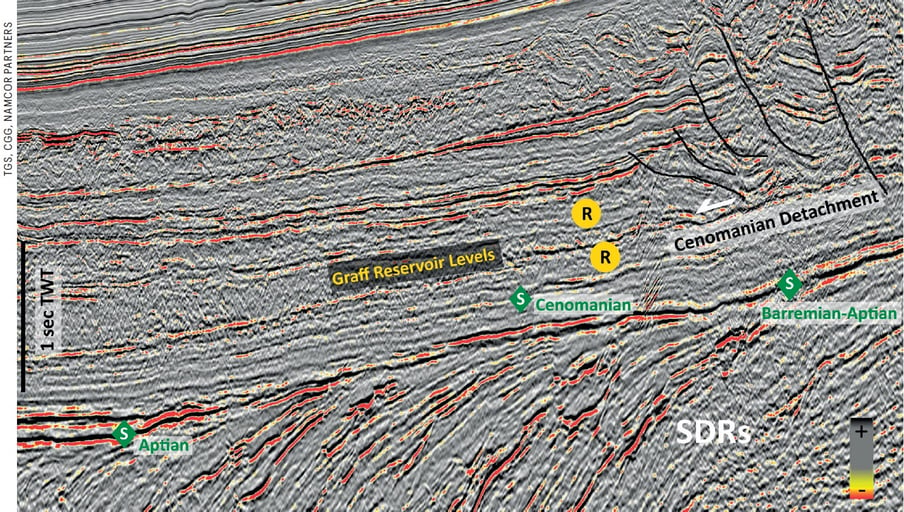 Figure 2: SW–NE dip line through the Graff light oil discovery trend at the western end of the toe-thrust system and the base of the collapse structures. The Santonian–Campanian turbidites have been trapped above the outer high, which likely acts as a backstop for the reservoir influx from the east. Light oil in two different reservoir levels has been discovered by Shell in 2022.

Source Rock Presence and Maturation Modelling
Interpretation of regional seismic data and well information along the Namibia and South Africa margin suggests that the Barremian–Aptian source rock is distributed over wide parts of offshore Namibia, as far north as the Walvis Ridge, and southwards into South Africa. The source rock...