Could 2021 Be A Tipping Point for Energy Transition Initiatives in Europe?

In business, it is said that momentum is crucial. That being the case, it looks like 2021 could be the start of a bumper year for the offshore wind industry. Already this year there have been a number of eye-catching announcements that indicate a positive direction of travel for the sector and bodes well for considerable growth in the near-term and the years beyond.

Firstly, there was a rush of bids in a major auction of developers vying for seabed plots made available to build new offshore windfarms off the coasts of England and Wales. Two wind farm sites within the Irish sea have reportedly enticed a fierce bidding war, with energy firms offering to pay as much as £200m for each of the sites – attracting a total revenue of £400m a year. The licenses carry a validity of 10 years, which means that the auction will raise at least £4bn over the coming decade.

Next, the Danish government confirmed that it had taken a majority stake in a £25 billion artificial ‘energy island,’ due to be built 50 miles (80km) offshore, in the middle of the North Sea. The energy hub in the North Sea will be the largest construction project in Danish history and will significantly contribute to the massive potential for European offshore wind. Alongside an additional wind hub on the Baltic island of Bornholm, the two hubs will initially support 5GW of wind generation and triple Denmark’s current installed offshore wind. Capacity expects to expand to as much as 12GW. Announcements from the Danish government state that it will work with private sector partners to accelerate the process and enable wind generation to be brought online in short order.

The third major announcement concerns Shell and an agreement it has signed with Irish marine renewables developer, Simply Blue Energy. It is due to acquire a 51%t share in a floating wind farm to be built in the vicinity of the Kinsale gas fields off the southern Irish coast, which are presently undergoing decommissioning. As floating wind technology can be installed in deep waters, it will allow this development – under the name, the Emerald Project - to be sited between 35 km and 60 km offshore, while reducing any visual impact. The first phase will include 15-25 turbines and 300MW of installed capacity is planned initially, with the potential to scale-up to a total installed capacity of 1GW - equivalent to powering 800,000 homes.

These and other recent heavyweight announcements prove that Europe is now a clear leading force in offshore wind and other green technologies that power the energy transition. And recent history proves the point: Since 2005, the EU has almost doubled its power generation via renewables, leading to sustainable energyu providing around 34% of the bloc’s energy supply in 2019. Given the EU’s lofty ambitions to lead the world in meeting the challenge of climate change, these figures certainly point towards achieving that goal.

In 2020, the European Commission laid out its renewables plans – under the name, Green Deal – demonstrating a radical plan to achieve carbon neutrality by 2050 that will reshape economies from agriculture to industry and the hope to advance greener societal change. As part of this goal, it stated a need to increase offshore wind capacity to 300GW for the continent’s targets carbon reductions to be met.

The Green Deal and the business and industrial environment that this is developing are a substantial fillip to the renewables industry and energy transition champions such as the oil majors. But, as with most aspirations for development, finance is critical. The EU has highlighted its €672.5bn Recovery and Resilience Facility, of which it has earmarked a minimum of 37% towards green transition. Industry aspirants also have access to many other funding sources, including the EU’s InvestEU, its Connecting Europe Facility, the European Investment Bank and other international and multilateral financial institutions to help stimulate new renewables projects. Though much more private capital will be necessary to finance the industry, the start of 2021 has already shown that both the desire and action of present and future players are in place – and developing swiftly. 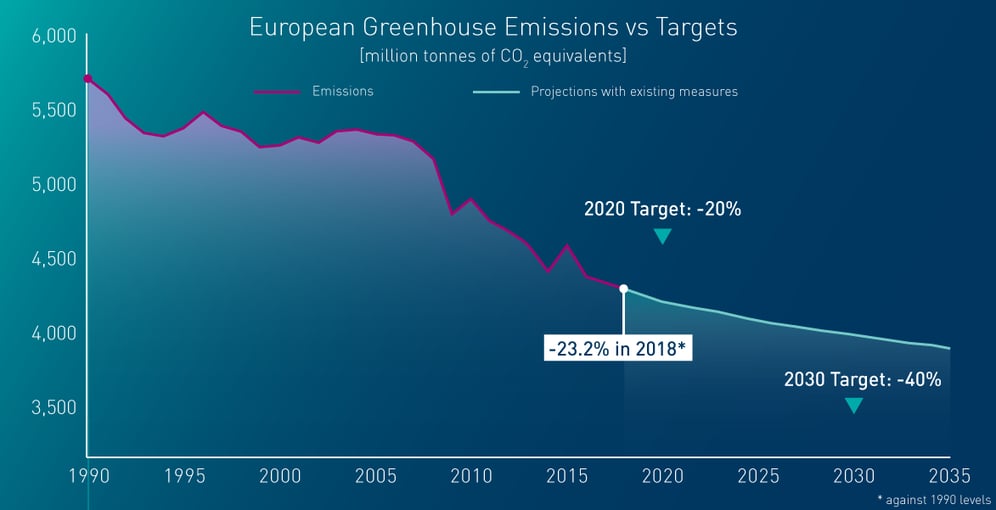 The evolution of greenhouse gas emissions in the EU between 1990 and 2020 and projections up to 2035. Initiatives like the Green Deal hope to put Europe back on track to meet 2030 targets. Source: European Environmental Agency.

The Role of Oil & Gas

Once again, one of the industries that are best placed to take advantage of offshore wind’s growth is the oil & gas industry, with its unique history of decades of shallow and deepwater field development. From fabricators and seismic operators to construction specialists and shippers, a large number of oil & gas companies are swiftly making the transition over to the offshore wind market due to the alignment of the skills required for both industries.

Right across Europe, from Denmark, and the UK, to the Irish Republic, 2021 has already seen flagship developments announced and soon to get underway. Though it will take more than just goodwill for the EU to meet its 2050 carbon neutrality targets and for the ‘traditional’ oil & gas companies to make the energy transition a reality, the signs are there. The green power momentum is gathering a head of steam. The tipping point for renewables to be the majority power generator within a few years is now an expectation rather than an aspiration.