Volcanic provinces are an inevitable stage generated during the continental break up, marking the boundaries of both subduction zones and spreading ridges, they provide a mechanism necessary to release pressure and energy derived from tectonic movement. The material produced through vulcanism pours into growing basins while interbedding with, and covering, other sediment. Hydrocarbons are eventually produced and expelled from source rocks within the basin and find their way into ideal reservoirs. Many of these optimal reservoirs are sealed or interbedded with volcanic facies. Unfortunately, for explorationists this volcanic material has presented a substantial challenge to image through seismic surveying, making it very difficult to accurately prospect for hydrocarbons.

Basins in the Caribbean, offshore Argentina, Brazil, Greenland, Angola, India and northwest Europe have potential hydrocarbon reserves that exist beneath various volcanic facies, particularly basalt flows. The Atlantic margin of northwest Europe is a prime example of an area where basalt flows have hindered imaging of reservoirs. The Rosebank field in the Faroe-Shetland Basin was discovered in 2004 and was one of the first attempts to develop and de-risk intra- and sub-volcanic reservoirs. The operators spent the next decade trying to risk the prospects by drilling a number of appraisal wells, some of which showed potential, but due to imaging challenges new seismic was needed to address the issues. More recently, global economic constraints have slowed development substantially.

In 2010 Chevron drilled the Lagavulin well in the UK Atlantic Margin to prospect a sub-basalt target and turned up a dry hole. Then, in 2012, offshore the Faroe Islands, Equinor’s Brugdan II well, and subsequent re-entry, attempted a sub-basalt target, but was also commercially unsuccessful. Like Rosebank, both prospects ran into seismic imaging challenges and technical drilling difficulties. The momentum for exploration in this region faltered due to these failures and was subsequently compounded by the 2015 economic downturn. During this hiatus of frontier drilling, engineers and geoscientists have continued to develop new technology to overcome the technical problems and provide pathways to evaluate and efficiently drill for the large quantities of hydrocarbons known to be present in the North Atlantic sub-basalt reservoirs.

Over the past two decades, seismic geophysical service companies have rapidly advanced both acquisition and processing technology. They have developed workflows that are capable of producing detailed imaging of both intra-volcanic and sub-basalt reservoirs. This technology has been driven by seismic specialists like TGS who in 2018 developed a focused research program called SIR (Sub-Basalt Imaging and Research). The focus of this research was to adapt workflows from seismic programs in the Gulf of Mexico and Brazil where methods developed to image around and below salt have solved issues related to modeling velocity inversions, signal to noise (S/N) improvement in 3D shot migrations, and accurate removal of multiples.

The first step in solving the volcanic-related imaging issues is found in acquisition where traditional narrow-azimuth surveys with short streamer lengths and limited source potential have been replaced by deploying multiple advanced sources in full-azimuth surveys acquired with ocean-bottom nodes (OBN) or multi-azimuth surveys with long streamer lengths. These advances have made it possible to both create and acquire densely spaced data with a wide spectrum of low to high frequencies necessary to accomplish detailed imaging in a structurally complex environment.
Advancements in computing power and storage have contributed greatly to the development and refinement of preprocessing and image processing workflows. In particular, the evolution in computing has made it cost and time-effective to run additional de-multiple sequences with 3D Surface Relate Multiple Elimination (SRME) and advance velocity modeling methods. The improved computing efficiency when using wave equation-based techniques for velocity model updating has made it possible to image and map intra- and sub-basalt events. 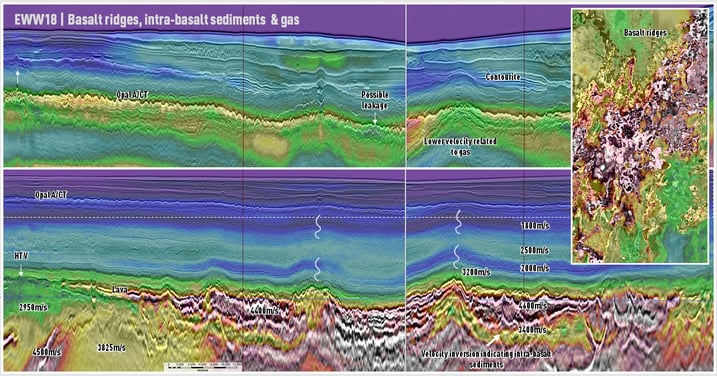 With the acquisition of modern OBN surveys and longer streamer lengths in multi-azimuth surveys, more long offset data has become available and has made it possible to use full waveform inversion wave-equations like DM FWI to further refine the intra and sub-salt image. DMFWI is an inversion method based on finite-difference modelling that reduces the differences observed in seismic and synthetic data through updates of the velocity model. Recent research by the SIB group at TGS has shown the DW FWI to create velocity model updates that are less sensitive to cycle skipping, are able to use all information in the data including reflections and refractions, can be fully automated for detailed high contrast delineations and create a structural conformable update. When long offsets and robust data are available DM FWI in a processing sequence with COR and DIS are able to improve event continuity beneath the basalt without smearing faults or losing detail and improve imagining of intra-basalt reflectors.

The North Sea/Atlantic Margin has been a prolific hydrocarbon producer for over 60 years, most of the large easy to find reservoirs have been discovered, developed, and will retire in the coming decades. If hydrocarbons are to continue to be produced in this region new exploration in frontier areas will have to commence. Intra and sub-basalt plays show potential for untapped future growth and with recent advances in engineering and geophysical technologies these reservoirs can be de-risked and developed economically.

The benefit of advancing wave-equations and seismic processing workflows to enhance imaging of volcanic facies is showing an additional benefit of providing techniques to progress other energy and climate initiatives. Carbon Capture Utilization and Storage (CCUS) and geothermal exploration are two areas where accurate mapping of volcanic facies and their surrounding sediments can provide the data needed to develop these new clean energy technologies. Thanks to the determined effort of geophysicists to drive cutting-edge technology it is becoming possible to image once hidden sediments and structures that provide valuable insight into geological processes, hydrocarbon generation, and new avenues for clean energy generation and storage. 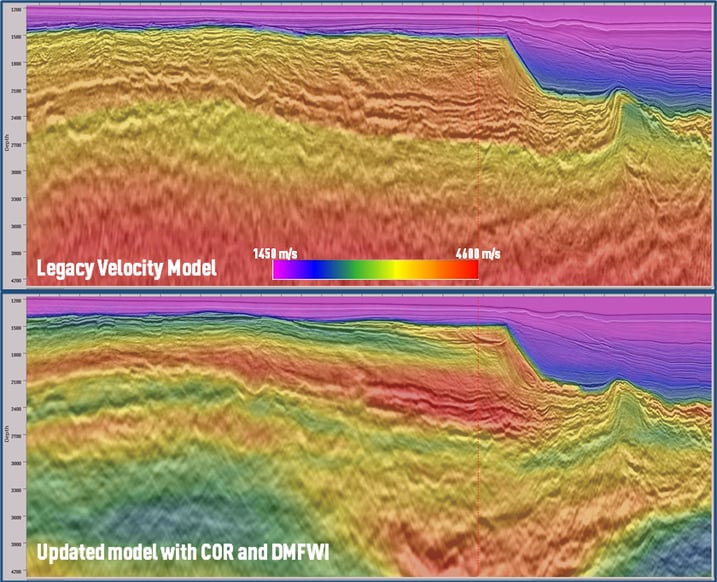 Figure 2: Results from CVX1101Re20 after multiple passes of model building using DMFWI, COR and DIS. The lower image shows the volcanics have been picked (red) as have the lower velocity (green/yellow) sediments in-between.