The New York Bight wind lease auction blew past expectations – but
who got the best deal? Phillip Hargreaves and Scott Eichelberger use the TGS Wind AXIOM analytics platform to gain more insight.

The New York Bight wind lease auction held recently was the first US offshore wind lease auction since Massachusetts in 2018 and was a decisive milestone for the future of wind energy in the US. The auction offering six lease areas across the New York Bight area of the US east coast covered more than 488,000 acres. It accomplished two records by offering the largest lease area of any previous auctions and consequently generated the largest total investments to date, setting a new record of $4.37 billion in winning bids (10 times greater than that raised in Massachusetts for a similar total area). Even the lowest winning bid significantly exceeded the previous record for any offshore wind lease in the US. 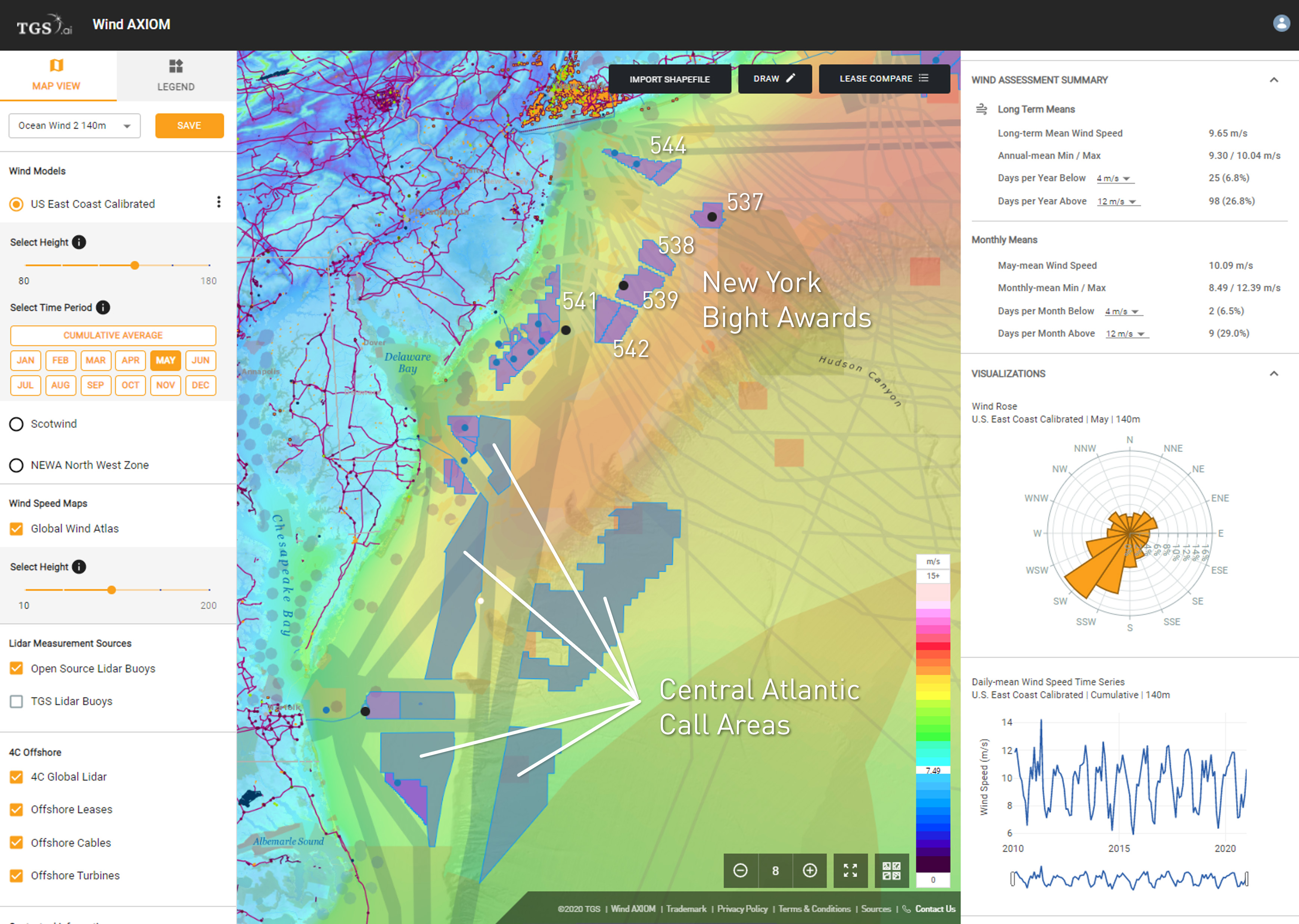 Intense Competition
Many of the world’s largest and most experienced offshore wind developers participated in the three-day auction. Fourteen of the 25 company groups that were prequalified took part in the bidding. Of these entities, only six walked away with winning bids. Notably, some of the largest stakeholders of the existing US offshore wind leases already under development were not successful.

BP, Equinor, US Wind and Avangrid Renewables, with a combined future US offshore pipeline of 10.3GW, all had their maximum bids surpassed. In addition, Ørsted, well known for its high-profile status in the European wind market and current 5.9GW stakeholder in US capacity, did not participate after pre-qualifying. Notably, new entities entering the US offshore wind market won the three largest leases. RWE & National Grid secured the largest area in the 521km² block “539” (OCS-A 0539) for $1.1 billion, US onshore player Invenergy won the 346km² “542” lease with $645 million, and TotalEnergies secured the 341km² “538” lease for $795 million.

Bang For Buck
While captivating to focus on the total bid values, the true ‘value for money’ is revealed when comparing the new leases’ price per unit of energy. This gives us a narrative not only on the bang for buck achieved by the winners of this auction but also allows us to compare that success against previous auctions or future call areas in the US offshore wind roadmap. Using the TGS Wind AXIOM analytics platform, it is possible to clearly present windspeed values, and idealised energy output statistics across all New York Bight lease areas (figure 1) and into the Central Atlantic call areas due to be auctioned next year.

Combining the energy output values from Wind AXIOM with the winning lease amounts, allows us to directly compute a price per unit of energy value for the New York Bight leases. This information is powerful - we can compare the bid price per GWh/year for each lease (figure 2) and, using electricity credit agreement baselines from nearby leases, we can also place
expectations on potential annual revenue for each lease...