In a previous Well Intel post, ‘Abandoned Wells – How big is the problem, and what can be done?’, we discussed possible alternative uses for end-of-life oil and gas wells. One such use is repurposing wells for geothermal energy production. In this article, we will discuss the typical constraints necessary for geothermal energy production, the datasets required to identify prospects, and the potential benefits of integrating with existing power generation systems. And as we will discuss, the synergies with other renewable systems make this a much more viable solution for driving a continuous energy transition.

The primary constraint for geothermal production is high fluid flowrate. Geothermal systems typically operate at a higher efficiency as the flowrate increases. Therefore, the main target for repurposing is oil and gas wells completed in high porosity and permeability reservoirs, with a history of high fluid production, which have since watered out. TGS Well Performance Data can be used to identify wells that have historically had high monthly oil, gas, and water production but are either shut-in or no longer producing at economic levels [figure 1]. There is also a secondary application for geothermal systems involving CO2 injection. Here, two nearby wells would be completed in a tight formation with a dense fracture network connecting the bottom-hole well locations. One well would be used to inject CO2 while the other would produce it, forming a closed system. This method requires a significantly higher up-front investment but also has the potential to produce with a much higher consistency and level of control. Here TGS well and production data can also be used to identify nearby wells, usually parent/child or sibling wells, that are completed in the same formation with adjacent subsurface completions.

The second major constraint on geothermal activity is heat. Whether using in-situ reservoir fluids or injected CO2, the driving force of geothermal production is turbine-driven heat exchange. Therefore, the target reservoir needs to provide heat in excess of 100 degrees Celsius or 212 degrees Fahrenheit. Here, the TGS Basin Temperature Models (BTM) can be used to identify suitable locations that are deep and hot enough to generate that kind of temperature differential. [Figure 2] shows an example of the temperatures (up to 325 degrees F) along the top of the Ellenburger Group in the Delaware sub-basin of the Greater Permian Basin. The Permian Basin is not a particularly hot basin, but the high data density and number of aging wells make this a good case study for investigation. [Figure 3] shows a BTM temperature slice of the Permian across the Delaware and Midland sub-basins at a depth of 10,000 ft ss. The local temperature variations observed reflect structural and lithological controls. 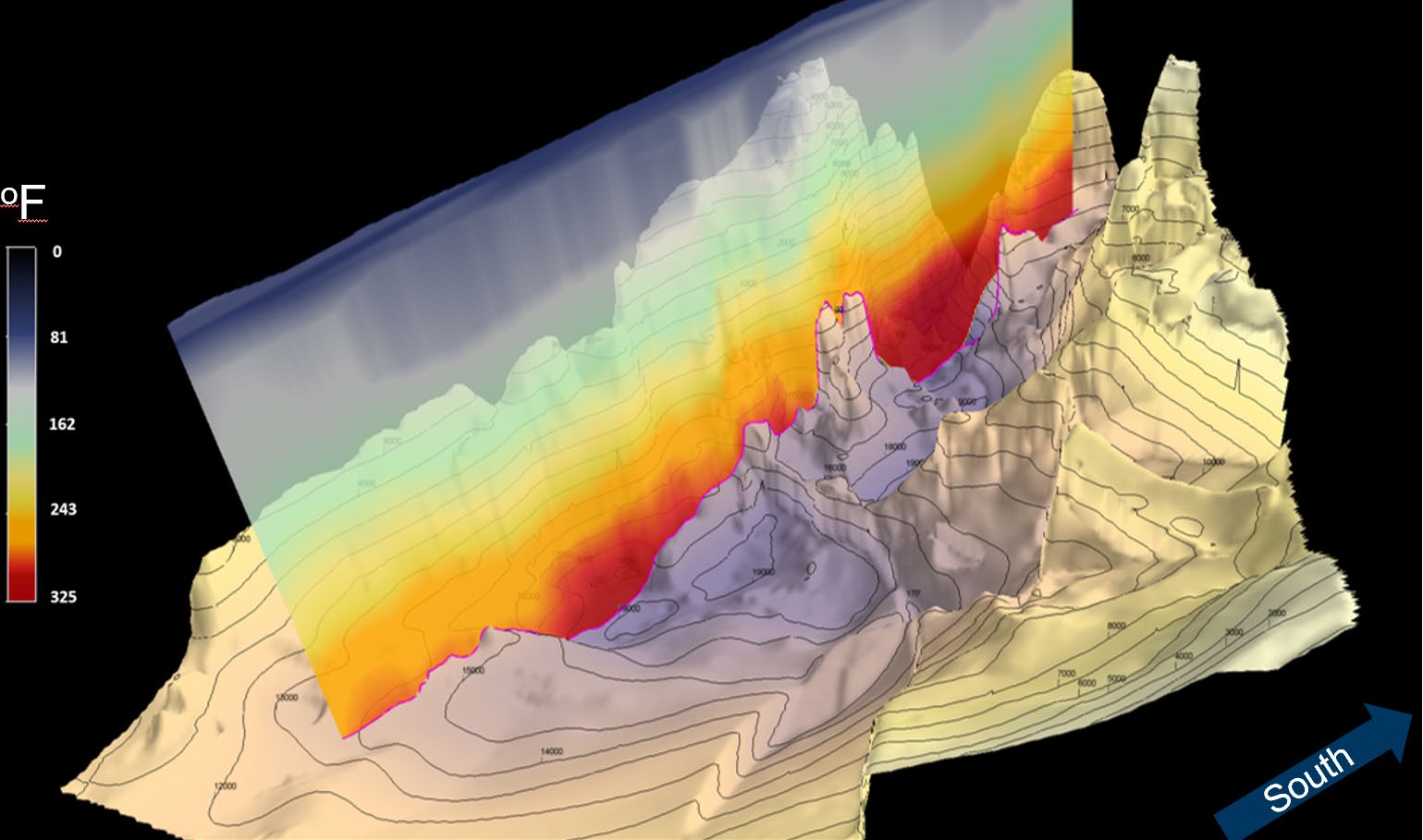 Spending a few minutes on combining these two datasets leaves us with a group of wells that (1) have high fluid flow-rate potential and which were (2) drilled deep enough in a hot enough area of the basin sufficient to generate geothermal energy. [Figure 4] shows the 10,000 ft areal temperature slice, with three well scenarios superimposed to identify potential target locations.

A final consideration is how to make use of the power generated by converted geothermal wells. In some instances, remote wells can provide local power to nearby leaseholders and landowners, but power transmission infrastructure is required to use geothermal energy in most cases. Here’s where coordination with other forms of renewable power generation can make a significant impact. Solar plants and wind turbines tend to have similar power transmission requirements to geothermal wells, so proximity to existing or prospective renewable projects to transmit geothermal energy is an important factor. [Figure 5] shows the combination of basin temperature, suitable geothermal target wells, with existing solar plants and wind turbines as available from the TGS Geothermal Pathfinder dataset. Sharing transmission systems with other renewables could benefit geothermal well owners and solar and wind project owners. Compared to conventional power generation, a major challenge with solar and wind power is intermittent energy generation, either when the sun is out or when the wind is blowing. This is a significant problem for grid operators, which could be alleviated by adding geothermal wells, which could be operated intermittently at times of lower solar or wind power to balance out renewable power generation loads.

Dealing with wells nearing the end of economic life remains a challenge and considerable expense for many operators and society. Among the different options available, geothermal stands out as a particularly useful and efficient solution. Aging oil and gas wells that are drilled deep enough and completed in reservoirs with high fluid flowrate to generate sufficient heat exchange, located close to existing solar or wind power plants, would be ideal targets for conversion to geothermal wells. The fact that this solution satisfies multiple aspects of a sustainable and continuous energy transition is the icing on the cake.