Well Intel: Abandoned Wells – How big is the problem, and what can be done?

Home Media & Events Well Intel Well Intel: Abandoned Wells – How big is the problem, and what can be done?
Download PDF

In a widely publicized report from October 2020, the non-profit organization Carbon Tracker estimated there are over 2.6 million US onshore wells that are abandoned or orphaned and need to be plugged 1). They estimate that the cost of plugging these wells exceeds $280 billion, and they argue that the amount of money secured by oil & gas operators does not come close to the cost to plug all orphaned wells. This could leave state regulatory agencies, and potentially US taxpayers, on the hook for the remaining cost. Is this assessment an accurate representation of the dynamics and magnitude of the problem? Using TGS production data and industry news aggregated by TGS Industry Updates, we will identify the scope of the problem, review counterarguments, and investigate potential solutions.

The Carbon Tracker report includes an overview of the state-by-state counts of estimated orphaned wells, which are presumably sourced from state regulatory agency data. Using TGS Well Performance Data, which consists of a combination of state regulatory agency data and proprietary historical datasets, we’ve tabulated our estimates of orphaned or abandoned wells by state using reported well statuses, plugging reports, well production records, and other reported and inferred data attributes [Figure 1]. We estimate there are closer to 1.5 million abandoned or orphaned wells, with 420,000 wells in Texas, 174,000 wells in Pennsylvania, 212,000 wells in Oklahoma, and 114,000 wells in Wyoming. This would still amount to a relatively large number, but already 40% below the initial estimate.

Next, we can look at the cost, which is estimated in excess of $280 billion. The Carbon Tracker methodology relies on a variable cost based on the well’s depth and also considers the cost to originally drill the well 2). Similarly, the Texas Railroad Commission publishes detailed plugging cost estimates per foot of well length in each Texas district 3), and the average cost per well has been increasing in recent years. Using this methodology and cost estimates from this last year, we predict the amount required to plug all outstanding orphaned and abandoned wells in the onshore US would cost approximately $90 billion. Carbon Tracker also asserts that the estimated plugging cost will far exceed the bonds that active operators have secured and that the remaining burden will eventually fall on the shoulders of taxpayers. However, a statement from the Texas Railroad Commission downplays that risk. An RRC representative stated that oil and gas operators mostly comply with laws requiring them to plug their own wells that are no longer in use and, in cases where orphaned wells are relegated from inactive or bankrupt operators to state control, that industry taxes and fees fund state plugging programs 4). One question to consider; could the significant uptick in acquisitions and bankruptcies among oil and gas operators caused by current industry conditions leave some abandoned wells stranded? If under normal operating conditions, the guardrails in place are enough to manage plugging orphaned wells, these extraordinary conditions could overwhelm the system. If that is indeed the case, we may need to look to new solutions to address this problem.

One of those new solutions might originate from innovation in wellbore plugging operations. Many different aspects of the oil industry have been revolutionized due to a renaissance in technological improvements. Drilling and completions are light- years ahead of what was the industry standard only a couple of decades ago. Unfortunately, plugging technology and operations have not seen similar improvements. The standard plugging operation, which still consists of covering a cast-iron plug with cement, is not ideal due to its cost and inconsistent long-term stability of the seal. Plugging operations are ripe for innovative new enhancements. One company is already testing a possible solution that uses thermite to create man-made magma that mechanically seals the wellbore by melting the casing and fusing it with borehole 5).

Data analytics could also help optimize efforts by coordinating resources where they would be used most efficiently or focused on high-risk wells. [Figure 2] shows TGS generated heat maps of abandoned and orphaned wells by county in some of the US states with the highest number of wells to be plugged. Subsurface information and production data can further help identify high-risk wells. 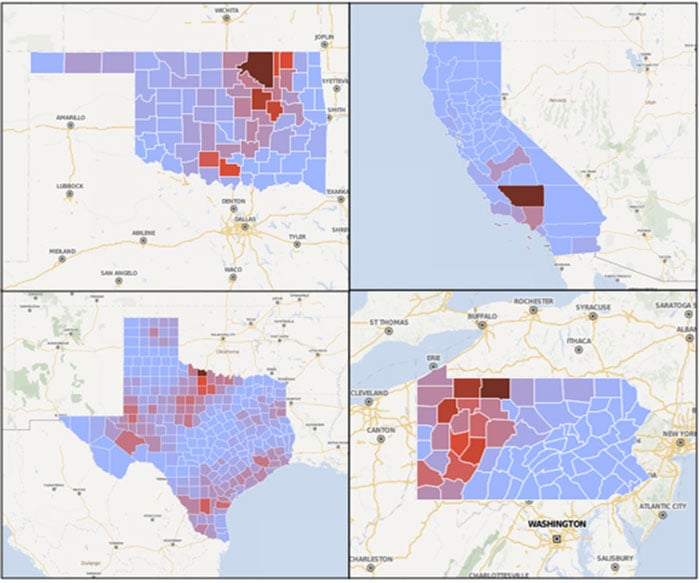 Another potential cost-saving measure could utilize existing well infrastructure to transform abandoned well sites into renewable energy units. According to Keith Hirsche, Founder and President of RenuWell Energy Solutions, performing plugging and solar power installation projects can simultaneously reduce operators’ long-term liability and create a sustainable revenue stream. Well site infrastructure like pads, powerlines, and maintenance roads, which are costly to rectify during P&A operations, can be reused. Combining the plugging and solar installation operations cut down on up-front costs, and longer- term costs like site monitoring and re-vegetation regulatory requirements are easier for the new solar lease operators to manage.

Could potential cost savings from technological innovations, data-driven operational enhancements, and renewable re-utilization projects bridge the gap between the cost of plugging and current regulatory funding? If not, potential alternative funding sources could be linked to federal, state, or local initiatives.

This type of deal is already happening in North Dakota, where some rig contractors are using coronavirus relief funds in conjunction with state plugging and reclamation programs to plug abandoned wells across the state 6). Los Angeles County is evaluating a similar measure to help pay to plug abandoned wells 7), and there has even been a developing consensus among some members of Congress that this could be addressed on the national level 8). In Ohio, two groups typically in opposition, the Ohio Environmental Council and the Ohio Oil and Gas Association, have joined in support of legislation that would allocate funds and streamline plugging operations in the state 9). As if on cue, the incoming Biden presidential administration estimates it could create “…250,000 jobs plugging abandoned oil and natural gas wells…” 10).

In summary, our analysis shows that there is a significant amount of potentially abandoned wells in prominent oil-producing parts of the country. The good news is that it is a smaller number than initially estimated. For an interesting twist, abandoned well site infrastructure could even have a second life in the renewables domain! The costs for plugging operations seem to be largely covered by the industry itself, either through compliant operators or special funds created by regulators. In addition, there seems to be consensus between environmental groups, industry, and regulators to catch the wells that fall through the cracks which could also help put some out-of-work oilfield workers back on the job. On the downside, it’s not quite as much fun to make sure wells never produce again as it is to drill news ones to help secure the energy needs of our communities.