For over a century, liquids in the ground beneath our feet have provided us with the energy to fuel modern society and will continue to do so for centuries to come. However, the next hundred years may not be defined by black gold but brine gold. High-temperature mineral-rich brine is coveted by power and energy storage producers as both a source for creating electricity and a wellspring for lithium.

Lithium is an essential component used to create high-performance batteries. These batteries power everything from electric vehicles to smartwatches to pacemakers and are crucial for storing excess power for wind and solar facilities. As a result, most industry forecasters estimate that by 2030 the demand for lithium will increase annually to 1.5 - 2.4 million metric tons from its current ~340,000 metric tons, a 300-600% increase.

A renewed push to find affordable clean energy has led to many new solutions and technologies. Wind and solar have driven much of the investment in large-scale new energy development, followed closely by geothermal. Geothermal energy production has a long history of providing reliable and efficient power.

At small scales, geothermal energy can be used to heat and cool individual buildings with a closed-loop heat pump. This technology can be utilized at relatively low temperatures. To create electricity, a geothermal plant needs a source of steam to turn a turbine. These medium- to large-scale geothermal facilities use a thermal loop to cycle geologic brine or synthetic fluids from the hot geologic reservoir (>100C) to the facility.

Advancements to make geothermal energy production more efficient while increasing the facility's life cycle are underway. The industry's goal is to advance technology and solutions to create energy at local to regional scales. The ability to mine lithium from the brine is a great benefit of utilizing geothermal energy to power the mining facility. The technology growth in lithium extraction techniques and efficient geothermal energy produce a symbiotic relationship between power generation and power storage that is not available in competing energy solutions.

The largest factor restricting the use of geothermal is the lack of ideal locations for current technology. Finding geologic formations with temperatures exceeding 200°C and a lithium-rich brine is difficult.

The majority of the world's lithium is produced in South America, China, and Australia with two forms of traditional mining. First, mineral-rich brine is pumped onto salt flats where it is precipitated in the open air then refined using various chemical processes to create lithium carbonate and pit mining of lithium-rich Spodumene clays. Refining the lithium from the source into a useable high-quality chemical is both land- and energy-intensive. In addition, the by-products of the refining process can contaminate the environment when handled irresponsibly.

Geothermal brine is unique as a source for lithium because the brine is cycled back into the earth after lithium extraction to continue the geothermal energy production cycle. A geothermal system uses far less land than traditional lithium brine evaporite ponds and pit mining facilities. Another benefit and unique cost advantage of including a geothermal system to provide the brine allows for the energy created from the facility to supply the power used to run the lithium extraction operation and the subsequent refining. Excess electricity produced from the geothermal facility is then sent to the grid to create an additional revenue stream.

Two areas of extensive research to both advance geothermal systems and develop technologies to efficiently extract lithium are in Northern Alsace in France and near the Salton Sea in the Southwest United States. In France, the EuGeLi (European Geothermal Lithium Brine Project) just completed a 3-year project where they met the technical objectives of producing high-grade lithium carbonate from the geothermal brine. The next steps are underway to optimize the process and make it economically viable.

The US Department of Energy and the National Renewable Energy Laboratory have sponsored a $4 million prize to entice research into technologies that promote Direct Lithium Extraction (DLE). The three-phase competition will accelerate the development and testing of DLE technologies and solutions. Final goals include improving yield and product purity while reducing energy and water consumption rates while finding ways to reduce and profit from chemical waste by-products.

The Salton Sea has a long history of producing geothermal power. Its lithium producing potential is anticipated to be ten times the amount of lithium that the US currently uses; if the DLE technology can be scaled to industrial proportions. 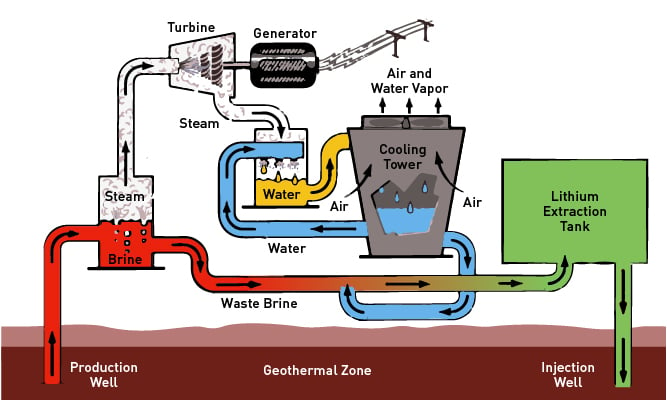 Private industry is also very interested in DLE technologies. Many rare earth mineral mining companies are developing proprietary DLE processes in some of their endeavors to source new lithium production in Nevada, Arizona, and Canada. The advancement of direct extraction technologies is making it possible to mine for lithium without using open-air extraction, making it possible to remove minerals from brine with minimal land use and less damage to the environment.

Ideal locations to produce energy and extract lithium will be a challenge as the technologies in both DLE, and efficient geothermal plants continue to advance. Exploration for geothermal sites will require the use of existing geologic data. Basin temperature models, seismic data, wireline, and core data will be an essential resource for evaluating geologic formations for high lithium content that reside in brine-rich reservoirs at temperatures capable of industrial geothermal energy production. Companies like TGS offer services that can benefit both investors and exploration companies to help them reduce the risk, find potential sites, and evaluate the cost of new facilities.

A Future of Abundant Energy and Storage

Finding paths to accomplish a future of abundant, reliable, and affordable energy is a difficult task. It will require the fast-tracked creation of new technologies formed from novel lab-driven ideas. The combination of lithium mining and geothermal energy production is an excellent example of how technology can quickly develop to meet the demand for both electronic devices and clean energy. The involvement of both public and private sector industries to make this process economically viable will accelerate the discoveries and allow for increased production of lithium to be environmentally sourced while creating clean energy.