For a number of years, multibeam imaging technology has been used to create a complete picture of seabed geological features, including hydrocarbon seeps. Measurements are often taken in tandem with seabed core samples but is this a necessary addition, in order to build a full picture of the seabed and make qualitative decisions for oil & gas exploration? Most importantly, do the numbers add up?

Multibeam surveys are typically undertaken for deepwater exploration – usually in 500-4000 m water depths – from which geoscientists will analyze seafloor bathymetry, its acoustic reflectivity, recorded as backscatter, as well as shallow subsurface structures in order to identify hydrocarbon seep features on the seafloor and throughout the water column.

Seismic surveys, of whatever type, are used to de-risk exploration and production activities and Multibeam is no exception. In the Gulf of Mexico, for example, all oil companies are required to submit a shallow hazards report and obtain approval from the Minerals Management Service (MMS) for well sites and pipeline locations. This report is used to highlight maps and assess seafloor and sub-seafloor geologic hazards. Based on backscatter anomaly maps, water column anomalies, and other parameters, such a survey also identifies possible seep zones that might affect the permitting and drilling of exploratory wells. Multibeam bathymetry is able to provide accurate mapping of the seafloor through means independent of the bathymetry derived from 3D seismic data, and with additional scientific information collated of the immediate environment, nature and composition of the seafloor, unlike in seismic acquisition.

Though the Gulf of Mexico is the region where most multibeam surveys have been carried out to date, offshore West Africa and the Egyptian Red Sea are frontier basins where multibeam activity is also gaining traction. Being able to gain an understanding of the physical attributes of the seabed as mentioned, and particularly the seepage of hydrocarbons from fissures is a first step to understanding the opportunities for oil & gas deposits.

In one example of Multibeam use, TGS has successfully undertaken the multibeam phase of its deepwater Nigeria acquisition project. Over 82,000 sq km of multibeam data was acquired at a water depth of between 750-3,500 meters and the company is currently high-grading the huge amount of anomalies identified in the data. The project is in partnership with the DPR, Nigeria, and using TGS’ local joint venture company, TGS-Petrodata
. 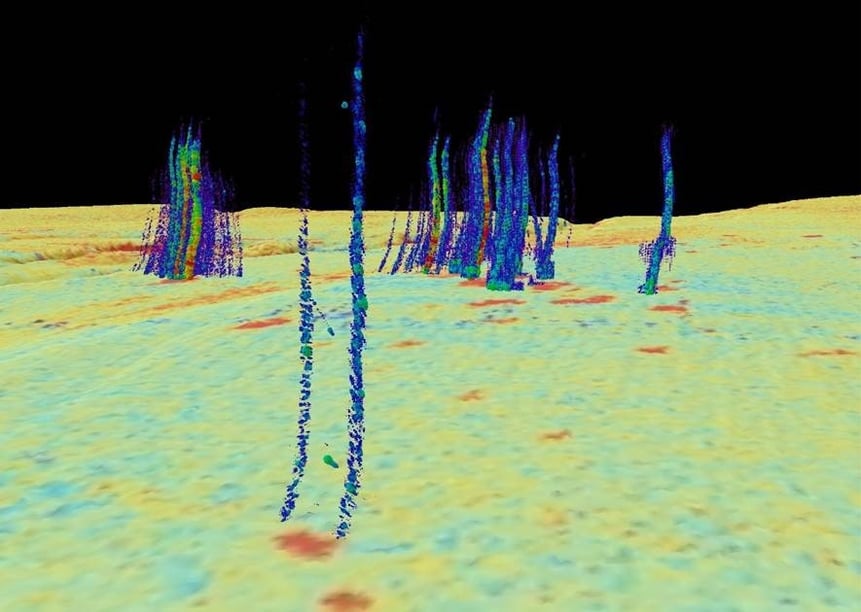 However, Multibeam only tells one side of the story. To allow for physical analysis of the seabed it is necessary to literally drill into it for core samples to get a fuller picture of what’s happening in the bedrock.

Thankfully, multibeam surveys are the key to selecting the coring locations and these are based on the positioning of various kinds of faults, hardgrounds, mud volcanos, and other seabed features which are correlated with the upward migration of oil & gas. Based on the survey data, locations are high graded, and in some cases, specific individual points are hand-picked to optimize the outcome of the results that the samples will give.

Though it sounds like a painstaking process to determine the position of hundreds of core samples, analysts are quickly able to pinpoint areas of interest based on the parameters collated in the campaign, particularly through interpretation of the size of the gas columns - choosing the larger ones first, or where there is more deformation on the seabed. The point to remember is, that the core sampling – which could run to several hundred drill points – is undertaken in locations where you would expect to get positive samples, as the aim is to back up the multibeam and backscatter images of the seafloor environment.

But what value does seabed sampling bring when analyzed in conjunction with multibeam data surveys? Does it offer a good return on investment?

Any additional tools to aid exploration, enhance geological understanding and de-risk potential must be seen as a positive and MBSS plays an important role here. For example, seismic can give you an idea of the structure of the subsurface and you can derive parameters to interpret whether hydrocarbons are there or not. But, conversely, the seismic data can point to areas to downgrade - where core sampling should not be undertaken, which also has value.

As technology improves and demand is sustained, the oil & gas industry is looking for resources in locations around the world that may have proved uneconomical in the past. Multibeam and seabed sampling together add another layer of crucial information in the hunt for oil and gas. However, it is only going to work in locations where you have leaky reservoirs – and are all subsea leaky? Going even further, the question is raised whether those reservoirs have emptied out almost completely and are no longer commercially viable?

As to whether a multibeam survey provides enough information in its own right, you would be guessing that the analysis of gas plumes are hydrocarbons rather than methane or carbon dioxide. Only by taking core samples can you begin to build up a picture of what is below the seabed, connecting parameters to the causes for the various different scientific data points collated at the seafloor, through analysis of the volume and composition of gaseous and liquid hydrocarbons typing them with isotope analysis and biomarker analysis, for markers of organic matter burial, migration and correlation studies.

The history of core sampling has proven that in areas where hydrocarbons are believed to exist in volumes - due to seabed seepage - core seabed sampling can refine the information, map out differences and help to build a better picture of nature and some time timing of seepage. Likewise, multibeam survey analysis can provide a greater understanding of the seabed itself and help to bring into focus seabed anomalies that point to hydrocarbons below the surface. But, bringing together multibeam analysis and seabed sampling is a real case of looking at the numbers and seeing that one plus one does add up to more than two.