What Goes Up, Doesn't Always Come Down (Part 2) – Helium & Seismic

Balloons and blimps - For many people, the word helium doesn’t come with many more associations than assisting levitation. However, as we learned in PART 1 of this article, helium is crucial to many of our lives.

THE BENEFITS OF HELIUM

Helium is currently in great demand through its unique properties as a non-flammable inert gas with a uniquely low boiling point (-268.93°C}. It provides benefits for superconductors, space travel, data storage, quantum computing, medical screening, and nuclear fusion, among many other applications.

As we also saw in PART 1, demand has significantly increased while political, production, and exploration issues have severely affected supply causing the price of helium to surge.

The confluence of high demand and low supply has spurred new investment to explore and increase stock to refill our reserves. Helium exploration is being driven regionally by companies like Desert Mountain Energy in Arizona, Avanti Energy in Alberta/Montana, Royal Helium, Global Helium in Saskatchewan, and Blue Star Helium in Colorado, with many others. These companies are building new processing facilities and drilling new wells, in conjunction with currently operating facilities and helium producers. The supply is growing, with more expected to come online soon. 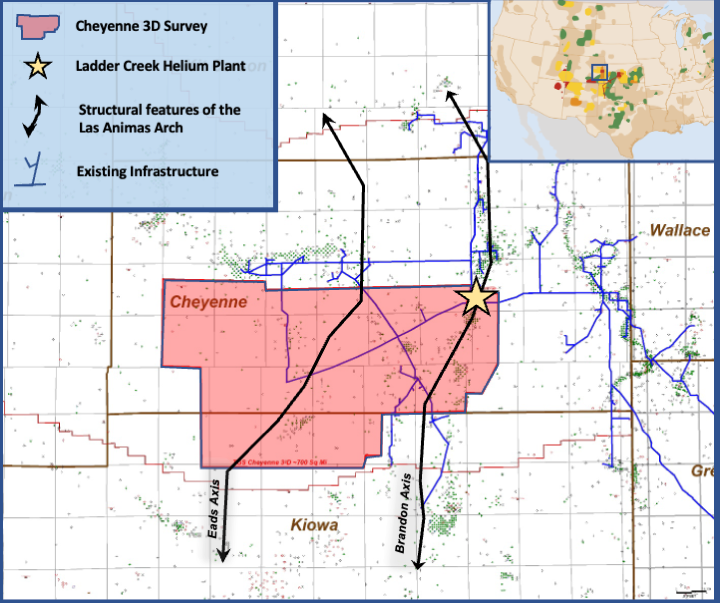 Helium is derived from the depletion of uranium and thorium in the granites and metamorphic crust and is traditionally sourced from natural gas wells where concentrations greater than 0.5% have been historically profitable, but 3-5+% is ideal. Finding large accumulations of helium is possible through examinations and interpretation of historic well reports, logs, and seismic imaging. These enhance our geologic knowledge of structural traps and associated basement features that account for high concentrations of depleted uranium and thorium-bearing granites and metamorphics.

The Las Animas Arch, in southeastern Colorado, is a subsurface basement-related anticlinal uplift that has been a positive structural feature separating the DJ Basin from the Hugoton embayment since the Mississippian period and has been overprinted by subsequent events, including the Laramide Orogeny. This region has been a known area of helium-rich natural gas reservoirs in the Pennsylvanian-Aged Morrow channel Sands.

Helium exploration in the region has traditionally been focused to the east In the Permian reservoirs of the giant Hugoton field, funneling helium into the BLM Cliffside reserve, leaving the Las Animas region under-exploited. As the price and demand for helium increase, new explorers are entering the area, chasing reserves with 2- 5+% helium concentrations. Additionally, Tumbleweed Midstream has advanced its Ladder Creek Helium Liquidation Facility and gained new contracts to increase helium production in the area. Eastern Colorado offers helium plays with established gathering and processing infrastructure, low drilling costs, and excellent economics 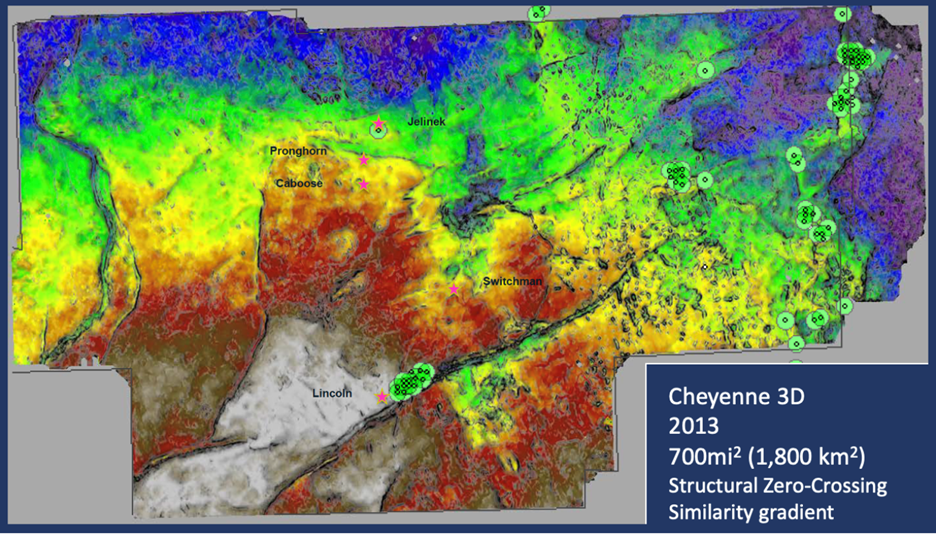 The Las Animas region in Colorado is an ideal area to illustrate the benefit that modern seismic provides to a helium exploration program. The TGS Cheyenne 3D seismic survey shot in 2013 covers over 700mi2 (1,800 km2) in Cheyenne & Kiowa Counties. This survey has been utilized to explore primarily Mississippian Oil fields, and more recently, it has begun to be used to explore the Helium-bearing Morrow Sands. The survey has been tested and processed for depth and shows remarkable imaging in both the shallow and deep areas of the arch.

TGS and affiliates have conducted multiple studies using this and other onshore surveys to show the value that seismic attributes have to de-risk and enhance onshore hydrocarbon exploration. Recently TGS, along with Integrated Seismic Technologies LLC & Tumbleweed Midstream, has used AVO inversion and other seismic attributes derived from the Cheyenne 3D volumes to directly image Morrow sand bodies. This conventional porous sandstone formation is a perfect reservoir with potential for uncomplicated vertical drilling and high concentrations of helium (up to 5+%) and other natural gas. Additional attributes are being tested to help target reservoirs below the Morrow, particularly the Reagan Sandstone. The Reagan SS is present across the Las Animas Arch and is a documented Helium Bearing Reservoir on Structural traps in Central KS*. 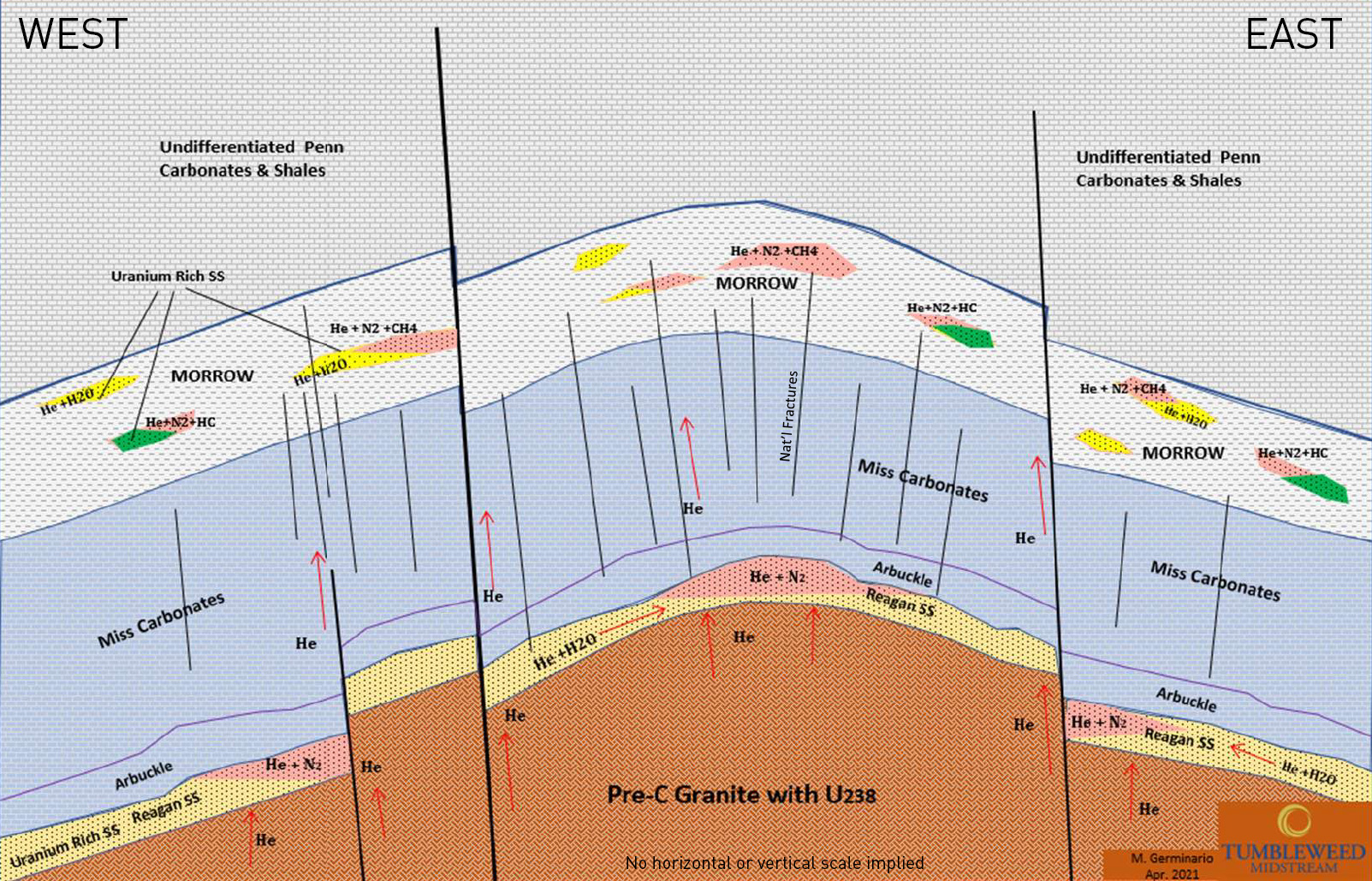 Figure 3: Illustrative cross-section across two arches within the greater Las Animas Arch region. Helium is generated through Uranium decay in pre-Cambrian Granitesand the associated uranium-rich sandstones. Helium migrates through formation water and is trapped stratigraphically and structurally. The Morrow and Reagan Sandstones are ideal helium reservoirs in Eastern Colorado.

One of the biggest benefits of 3D seismic is the interpretation of conventional structural traps, an exploration tool underutilized for unconventional exploration. Mapping of structures and identifying AVO attributes show enormous potential to identify areas of gas concentrations. Seismic, in particular, is being used to speed the process of finding new helium reservoirs. In basins with helium concentrations, seismic is used to define new traps and target new accumulations.

New seismic, combined with gas logs from historic wells have led explorers to find areas that have been conventionally explored and overlooked during the past decade as unconventional drilling has become more lucrative than conventional for onshore production. Several of the exploration wells drilled in the 40s and 50s in North America were looking for shallow structural traps. Many of these found gas in non-economic concentrations but recorded helium concentrations. Some of these areas in Nevada, Arizona, Colorado. Montana, and southern Canada are now being reevaluated and drilled. Early results show that these areas have recoverable profitable resources.

Elemental gasses, including helium, nitrogen, hydrogen, and neon, are essential to modern technology. However, the transition from hydrocarbons to cleaner energy sources is disrupting the availability and exploration of these essential gasses. For a future with continued technological improvements, exploitation of natural resources will have to play some part.

Thankfully, the hydrocarbon industry has been perfecting strategies to explore for and produce natural gas. New reservoirs can be de-risked and drilled using modern seismic and historical well data. The current shortages in the helium supply are driving innovation allowing new companies to find unique reservoirs in areas previously underexplored by the oil and gas industry. These novel exploration innovations will make it possible to reduce hydrocarbon use while continuing our technological advancements. Making it possible to have a green-powered birthday party without sacrificing the balloons.

With thanks to Jason Kegel (TGS) and Mark Germinario (Tumbleweed Midstream).