If you were to be told that a single scientific expedition had the potential to define new geologic understanding, identify causal mechanisms for global temperature maximums, contribute to CO2 storage exploration and enhance subsurface imaging techniques, you would be forgiven for thinking this might be a mission to Mars.

Thankfully, the International Oceanic Discovery Program (IODP), a continuation of government and academic scientific programs extending back to the 1960's, has actually been performing this research here on Earth. The data analysis from its latest expedition has been made, and the preliminary results are astounding.

From August to October 2021, the International Oceanic Discovery Program Expedition 396 (IODP 396) accomplished its mission to drill 21 boreholes at 10 sites within and near the Vøring Basin, offshore Norway, where they sampled igneous and sedimentary rock settings and compiled comprehensive wireline logs from eight boreholes. The expedition's main goal was to provide new data to create advanced geodynamic models to explain how the rapid creation of the large igneous province in the North Atlantic may be associated with the Paleocene/Eocene Thermal Maximum (PETM). The PETM occurred 56 million years ago and is characterized by a rapid 5-8˚C rise in global temperature. This event is commonly used as an analogue for modern climate change.

The expedition was able to significantly surpass its operational and scientific objectives by collecting additional core material and compiling a database of core and wireline data that is being used to test their many hypotheses. The new data will contribute to understanding the geological processes involved during the formation of the Atlantic ocean and evaluate the environmental consequences of continental breakup.

It will also help build new models for stratigraphic successions and allow the study of cored basaltic facies to build better models for CO2 storage. The data adds to the previous coring and sampling operations in the North Atlantic and will be available to the public in the future to bring insight to many geologic and environmental studies.

Map from IODP 396 Preliminary Report illustrating bathymetry and structure of the study area.

The expedition was able to significantly surpass their operational and scientific objectives by collecting additional core material and compiling a database of core and wireline data that is being used to test their many hypotheses. The new data will contribute to understanding the geological processes involved during the formation of the Atlantic ocean and evaluate the environmental consequences of continental breakup.

It will also help build new models for stratigraphic successions and allow the study of cored basaltic facies to build better models for CO2 storage. The data adds to the previous coring and sampling operations in the North Atlantic and will be available to the public in the future to bring insight to many geologic and environmental studies.

In terms of hydrocarbon exploration, the Vøring and Møre Basins are frontier areas that display great potential but have been held back in the past by a lack of high-quality subsurface data. However, modern 3D seismic using advanced processing to image intra- and sub-basalt in the area has illustrated many play types that correlate to proven plays to the south and east. Expedition 396 will help further reduce risk in the area derived from theories describing the basin sediment source as exhumed mantle and mudrocks which previously suggested hydrocarbon generation and storage were unlikely. The new data from IODP 396 indicates that the sedimentary source material is quartz-rich granite, and the basins are interbedded with basalt sands. This new interpretation opens a variety of plays that could contain significant oil and gas reservoirs.

Seismic from the TGS Atlantic Margin Norway 17 survey showing amplitude anomalies in the Lysing. Core data from IODP 396 will be used to reevaluate the source material and prospectivity of the region.

Energy and resource management companies will find the scientific knowledge gained from expedition 396 invaluable. The Norwegian Atlantic Margin is a historically prolific hydrocarbon producing basin and has significant future potential for CO2 storage. The area is also unique due to the volume of high-quality 2D and 3D seismic that is available.

Modern 3D seismic helped Expedition 396 pinpoint target sites, and in return, the core and wireline data will advance the processing models used to enhance the seismic image. Of particular interest is detailing the structure of the basins and associated eroded paleo-highs to constrain the stratigraphy and better understand the velocity regimes in sediment sourced from mafic and felsic parent material and its possible interactions with basaltic flows. 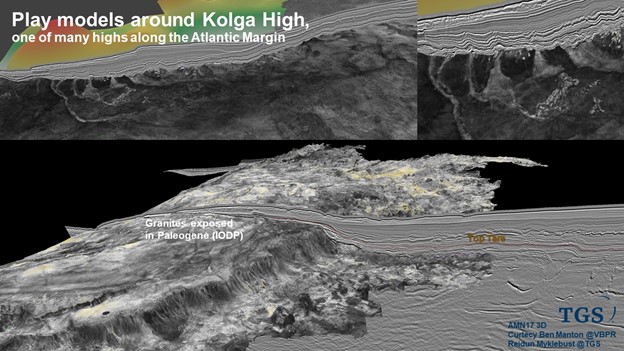 Seismic image of the Kolga High. One of the areas investigated by IODP 396.

Frontier basins are characterized by a lack of data that exponentially compounds exploration risk. This information scarcity creates a "catch-22" where drilling can't commence without data, and data can't be gathered without drilling. Fortunately, the continuing resilience of the academic community's drilling programs, combined with the vision of multi-client seismic companies, provides a unique avenue for science to advance and benefit our knowledge of the Earth for energy and environmental needs.

Companies like TGS have dedicated many seismic acquisition seasons to providing complete coverage of the Norwegian Atlantic Margin. Modern 2D and 3D seismic along the margin have led to numerous hydrocarbon discoveries and continue to provide advances in acquisition and processing that improve imaging in the previously difficult large volcanic provinces common along the margin.

In addition to hydrocarbon exploration insight, the IODP 396 crew also cast new light onto the viability of carbon storage in basalt provinces. Pore fluids were sampled from the entire drilling transect, and this data will help interpret meteoric water and circulation patterns. In addition, the hydrologic modeling of the fluid geochemical analysis will help provide constraints on the circulatory systems in basalt-rich reservoirs and greatly influence carbon storage exploration programs and potential drilling and engineering programs necessary for the safe long-term storage of CO2.

The newest seismic data using COR and DMFWI have shown the potential to image intra- and sub-basalt sedimentary sequences providing both new hydrocarbon play types and proving the value of the reservoirs for CO2 storage. Over the past 60 years, oceanic drilling programs have provided the well data needed to validate the geologic models and enhance the seismic image.

IODP Expedition 396 has continued the success of past drilling expeditions to bring new insight into the development of the North Atlantic. The new data from the cores, wireline, and fluid analysis will help refine the basins' structural models and stratigraphic successions. In addition, the data will provide valuable reservoir characteristics to model ideal CO2 storage scenarios and improve seismic imaging. Perhaps most importantly, the data from IODP 396 will provide insight into the PETM to model the environmental impact of global warming caused by large volcanic provinces. The academic, environmental, and energy industries will reap a windfall from the upcoming studies.

With thanks to Jason Kegel and Bent Kjølhamar