Assess outcomes of multiple wind models in one place

The existing approach to wind assessment often involves the modeling and analysis of individual leases in isolated data enclaves.  This poses several procedural problems.  The lack of a consistent modeled data volume reduces the understanding of the wind resource gradient over large areas and makes an equal comparison between leases with geographic separation difficult.  As lease boundaries or project requirements change data volumes can often find themselves only partially covering lease outlines- requiring re-ordering of data.  With large data volumes, multiple measurement sources can be included in bias correction methodologies, improving the overall robustness of the outcome.  A single larger volume is also easier to update with the latest-year model and measurement outcomes.

For these reasons, at TGS we approach Numerical Weather Prediction (NWP) modeling differently.  By specifying large regional datasets at high spatial and temporal resolutions, we avoid the drawbacks of the common industry approach- and can present a baseline dataset that enables reliable assessment and comparison of multiple leases or new windfarm areas at the same time. 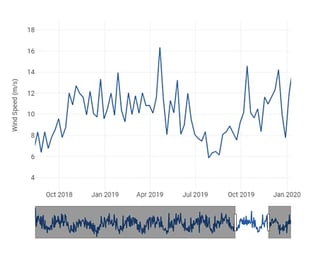 We are world leaders in data science involving physical observations.

The principle of spatially propagating a non-linear bias correction algorithm across a 4-dimensional data volume is familiar to us.  Similar methodologies are deployed when comparing subsurface measurements with seismic velocity models.

Guided by leading experts in the field of NWP modeling, we have developed the capability of correcting NWP data volumes with observational measurements carrying out the following procedure at each measurement site:

TGS presents over 1 million square km of NWP model data inside the Integrated Wind Atlas, covering over half of the world's offshore leases and key offshore lease rounds under interrogation now or expected to open over the coming months.

Some of this coverage is based on open-source data.  In other locations where the industry has focused its attention (The US East Coast and Scotland), TGS presents its own unique volumes- assessed against measurement data.  Going forwards, TGS will repeat this methodology over new focus areas, systematically capturing and offering the highest quality wind model data available over lease rounds to be offered over the next months and years- all made available via the TGS Wind AXIOM platform for consistent and straightforward analysis. 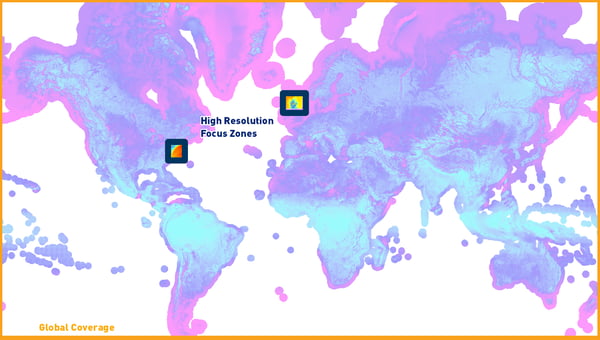 Are you seeing the BIGGER PICTURE? Contact us for more information or a Wind AXIOM demonstration.

A platform that provides instant assessment of the investment potential of any prospective offshore wind farm in the world.

Subscribe to our daily e-newsletter providing you with the latest news in wind, solar, geothermal and CCS.