Distributed resource plays whether shale, tight or other variants considered unconventionals, continue to prove in terms of predictability.

The goals for seismic characterization of resource plays include the determination of lateral variations of elastic and petrophysical properties within rock units. The understanding of how these relate to performance leads to quantitative reservoir characterization and the application of these data to support predictive analysis. These seismic-derived proxies for rock and elastic properties can be visualized and co-rendered in 3D space and readily integrated with other subsurface data.

Any shale resource characterization exercise beings with a discussion on requirements for the different available data types that would be employed in the workflow, including seismic, rock properties, petrophysical, geological, geochemical, geomechanical, measurements, maturity other estimates. With an understanding of the regional geology of the area, well-log correlation with seismic data is carried out, and defining the above and below the zone of interest, the phase of the seismic data is determined using synthetics derived at different well locations. The available well-log and petrophysical data are analyzed next from a rock physics perspective. 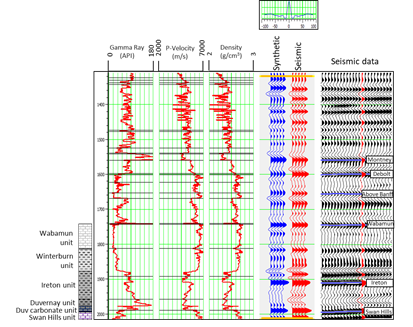 For a shale resource play to be successful, an optimum combination of depth, maturation, organic content, thickness, mineralogy, permeability, pore-pressure gas-in-place needs to work out favorably.

Most of the above key elements may be determined easily at the location of the wells, but the challenge is to determine them from seismic data to understand their spatial variation. 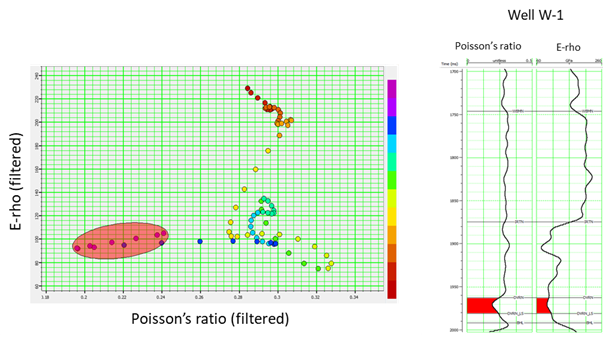 Crossplot between E-rho and Poisson’s ratio for well W-1 broadly covering the Duvernay interval.  The cluster of points enclosed by the red polygon appears to be anomalous and its back projection to the log curves shows that it highlights the Duvernay zone.

Crossplot of E-rho versus Poisson’s ratio attributes derived from P- and S-impedance values derived using prestack joint inversion, for data selected along passing through well W-1.  The cluster of points enclosed by the red polygon on back projection to the vertical seismic highlights the Duvernay interval that should be brittle.

Choice of attributes for shale characterization

Effective propagation of complex fractures in the formations of interest is dependent on the rock’s ability to fail in a brittle manner.  Consequently, various methods for of brittleness have evolved. One such method uses elastic parameters.

Usually, determination of density from seismic data is difficult due to the requirement of large offsets or angles.  With this in mind, a new attribute E-rho (product of Young’s modulus and density) was developed at TGS, which eliminates the requirement of long offsets.  As both Young’s modulus and density are expected to be high for a brittle rock, E-rho should also exhibit a high value for such a rock.

Crossplots of E-rho and Poisson’s ratio are first plotted from well log data for the zone of interest, and a cluster of points corresponding to high E-rho and low Poisson’s ratio marked off.  Equivalent for the same attributes derived from seismic impedance inversion are compared with the one plotted for well log data.  They should exhibit similar shapes of clusters.

Back-projection of marked off clusters on the on vertical seismic exhibit the zones that are called brittle sweet spots.

In addition, analysis and comparison of such log clusters corresponding to different in terms of their stress-strain curves also that a straightforward combination of high Young’s modulus and low Poisson’s ratio is indeed not accurate. It is no wonder then that engineers and geomechanics experts cringe at the mention of ‘brittleness’. 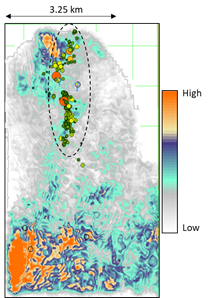 Once the desired attribute has been obtained after use of the appropriate transform, it can be visualized for capturing the sweet spots. Such an exercise includes determination of sweet spots corresponding to organic richness. 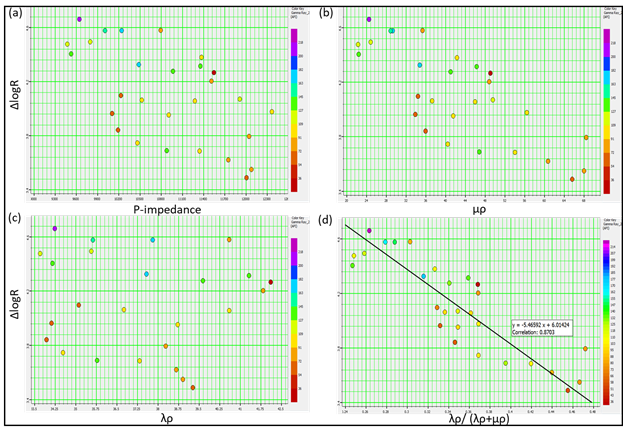 Crossplots of ΔlogR  with (a) P-impedance, (b) μρ, (c) λρ, (d) λ/λ+2μ.  A large scatter of data points is seen on three of the , except the one in (d), where we notice a linear relationship with a correlation coefficient of 88%.  This relationship is then used to compute the ΔlogR volume.

In the display below, of ΔlogR are shown with different and the pair of attributes that shows the best correlation is used to derive ΔlogR from seismic data. 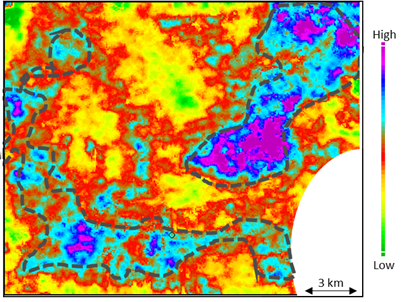 Horizon slice from the ΔlogR volume 10 ms interval below the Duvernay top marker. High values of interpreted as being organically rich as seen in the cooler colors.

Usually, when pairs of attributes derived from well log data are evaluated in space, a clear differentiation for the quality of shale may not be possible, as cluster points overlap.  As a result, the different models of the reservoir that we may deduce from the seismic data may have the same seismic response.  It is possible to determine uncertainties associated with such reservoir characterization.  In one such example, a Bayesian classification approach provided a facies model that reflects the quality of shale, and a probabilistic outcome as well, as the following examples illustrate. 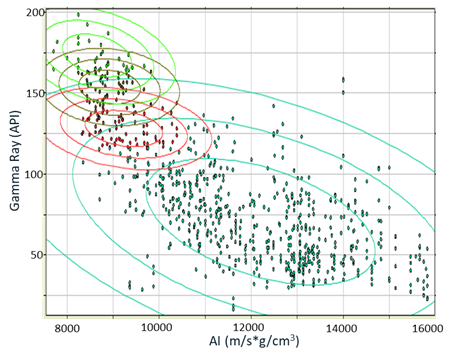 Crossplot between AI and Gamma Ray attributes for the Vaca Muerta shale in Neuquén Basin in Argentina. Probability density functions for three in light green, dark green and red are generated for the cluster points exhibiting low values of AI and higher values of Gamma Ray. These are then used for generation of in the Vaca Muerta shale.

Usually, when pairs of attributes derived from well log data are evaluated in  space, a clear differentiation for the quality of shale may not be possible, as cluster points overlap.  As a result, the different models of the reservoir that we may deduce from the seismic data may have the same seismic response.  It is possible to determine uncertainties associated with such reservoir characterization.  In one such example, a Bayesian classification approach provided a facies model that reflects the quality of shale, and a probabilistic outcome as well, as the following examples illustrate. 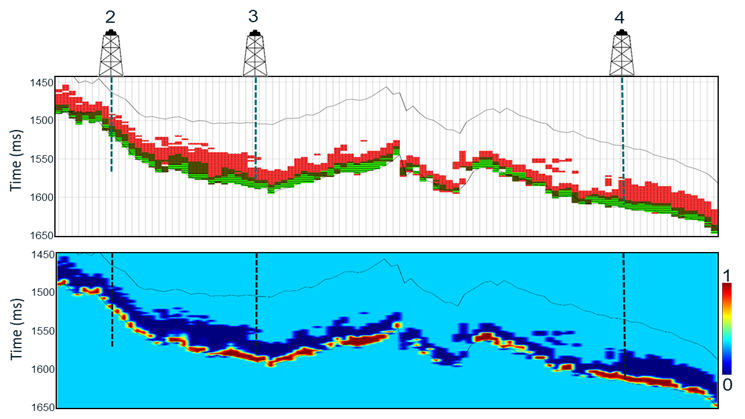 (Above): line passing through three wells through the facies volume. Better quality shale is noticed in the lower part of the formation as seen in light green) 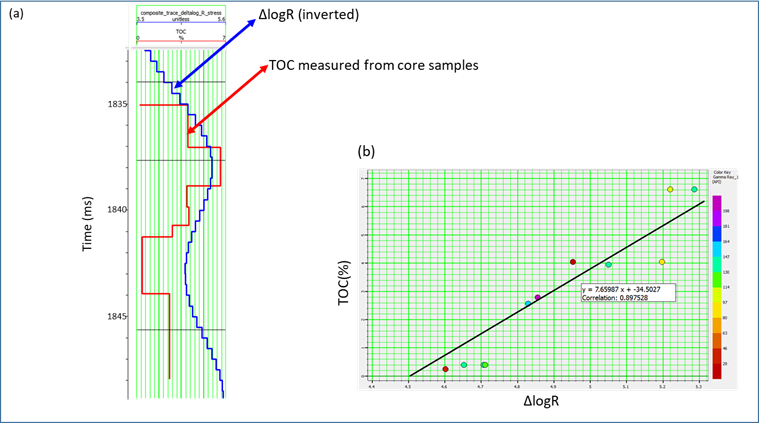 (a) The TOC values obtained from measurements on core samples over the zone of interest are shown in the form of a curve (red).  This was a blind well test.  Overlaid on this curve is the ΔlogR curve (blue) obtained by inversion of the seismic data.  The match is seen as good as the increasing and decreasing trends follow each other reasonably well; (b) a between TOC and a correlation of 90%, which again lends confidence to the analysis. 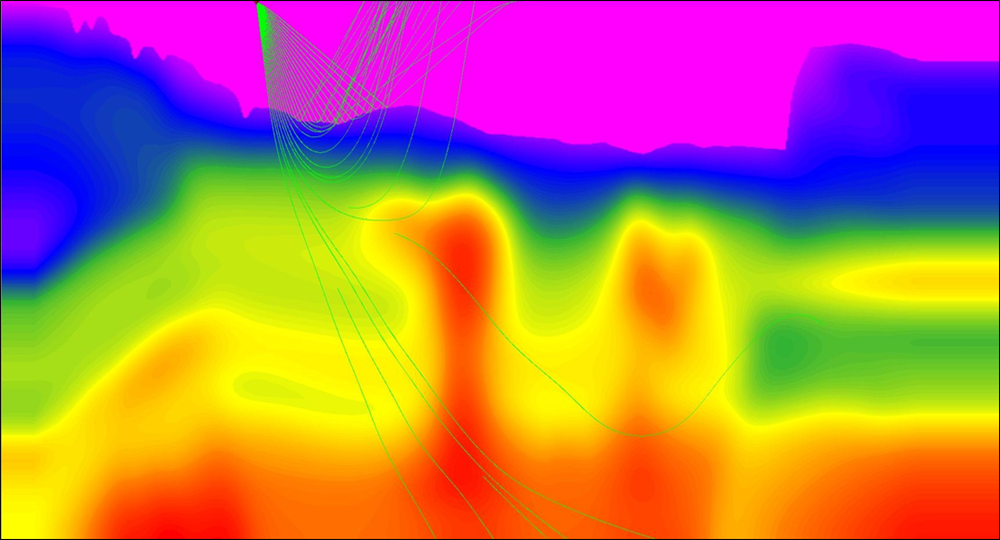 TGS has the technology, expertise resources to meet the highest geophysical processing objectives.