The Permian is typically known to be the powerhouse of Texas oil and gas production, and while unconventional drilling and completions have unlocked massive amounts of hydrocarbons, they’ve also opened the floodgates to exceedingly high levels of water production. Finding a method to dispose of this produced water is a major operating cost limiting the profitability of Permian wells. Re-injecting produced water into abandoned wells is usually the easiest option, but as oil output has increased in the last 15 years, so has water output and water disposal, leading to a tragedy of the commons problem. While there may be options available to more efficiently distribute the disposal water, a new promising ESG solution has emerged by re-imagining the role of produced water and treating it to be re-used in subsequent completions operations.

The ongoing practice of re-injecting produced water back into depleted, shut-in, vertical wells has historically been sufficient to keep up with production. But the massive increase in production brought on by enhanced unconventional completions have flooded the available disposal infrastructure, leading to critical unintended consequences. In the Midland basin many operators are reporting that the San Andres formation, a popular target formation for water disposal, is increasingly overpressured, causing significant drilling and completion issues for nearby targets. As water disposal into the San Andres increases, and the San Andres becomes more charged over the standard hydraulic gradient, drilling operators need to increase drilling mud weight and set additional casing strings to isolate the high-pressure formation. These are expensive operations, and as operators continue to dispose of water through existing wells into shallow, depleted formations problems will only multiply.

The TGS well performance database sources injected monthly water volumes and injection pressures from the RRC H10 dataset. Historical header data indicates which formations SWD wells are disposing into. Although the Texas RRC does not provide produced water volumes, TGS uses test records and header metadata to allocate monthly produced water volumes to individual wells. Combining this data, [Figure 1] shows 4 maps that summarize produced water, injected disposal water, disposal to produced water ratio, and the major formation used for disposal for each Texas county. As expected, the highest volumes of produced water and injected water are located in counties in the Permian. The final map shows that the main disposal formation in that area is the San Andres, though the Glorieta, Grayburg, and Devonian formations are also heavily utilized. 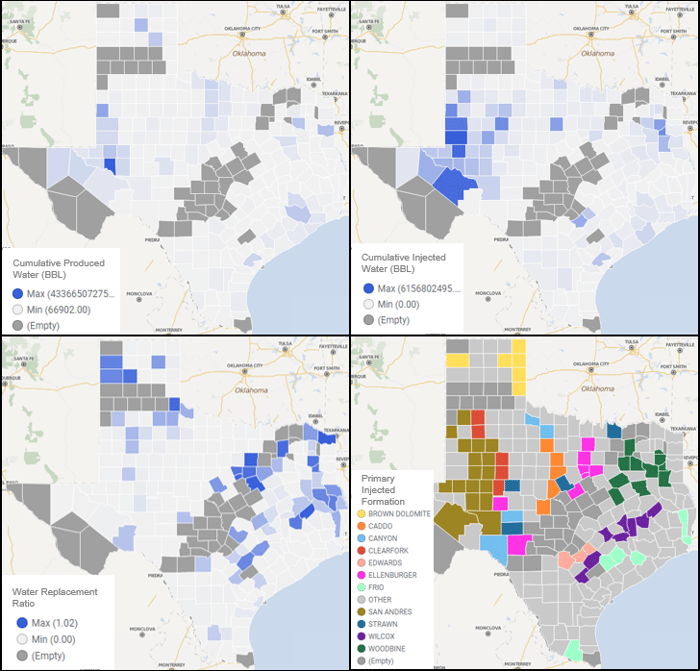 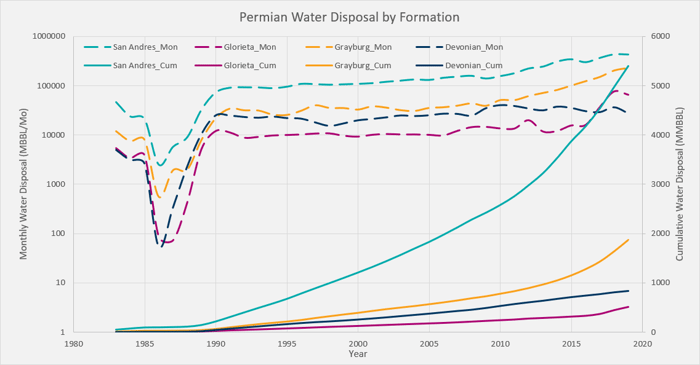 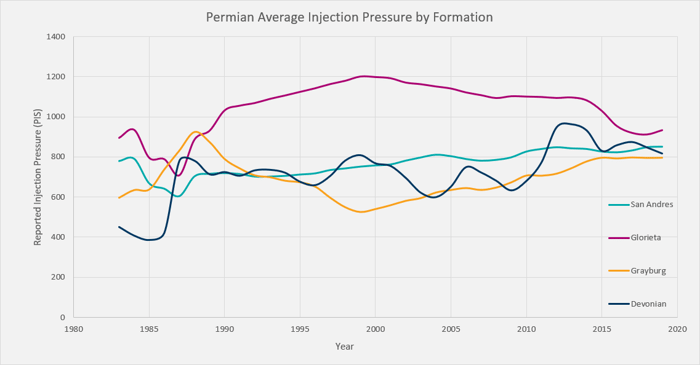 So, what is the solution to this problem? [Figure 4] shows the relative number of abandoned vertical wells in the Permian by original target formation (keep an eye out for more on  this  topic  in a  future Well Intel article). With the San Andres and others clearly filling up, it’s possible that other formations could become future targets for disposal. 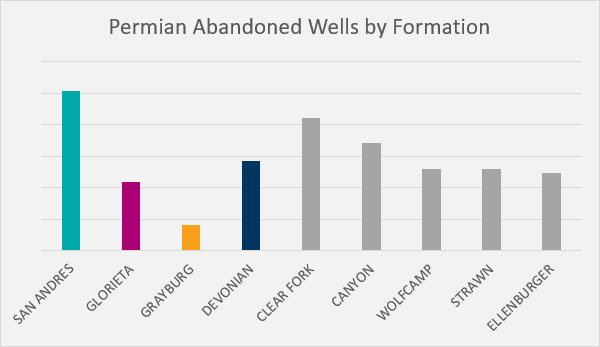 Alternatively, if the price of water disposal continues to rise, it may become economical to inject into deeper reservoirs. But these solutions would have a negligible impact from any individual operator, especially if neighboring operators continue to pump into existing disposal reservoirs. One alternative solution could be to join strategic partnerships to begin treating and reusing produced water in slickwater completions operations. There are pilot projects already underway to evaluate this method, and initial results look promising. Although high in initial capital cost, this strategy could be used to offset long-term operating costs from produced water, offset completion costs from slickwater, and help manage long-term drilling costs by maintaining adjacent reservoir pressures.