Torngat 3D will cover approximately 3,287 km2 and encompasses sections of the open acreage included in the Labrador South November 2021 bid round. PGS’ Ramform Titan will perform the acquisition, utilizing Geostreamer® technology.  The project is expected to commence in late July 2019.

The Torngat 3D survey sits within Labrador Sea’s southern sedimentary basins where frontier exploration has already successfully identified hydrocarbons, such as in the nearby Hopedale and Snorri discoveries. Torngat 3D will be the first 3D seismic survey to be acquired offshore Labrador.

Following this ninth consecutive season of data acquisition in offshore East Canada, the jointly-owned library will have more than 189,000 km of 2D GeoStreamer data and approximately 52,000 km2 of 3D GeoStreamer data. An expansive well log library is also available in the region, along with advanced multi-client interpretation products that will improve play, trend and prospect delineation.

“The successful joint venture between TGS and PGS has consistently provided the industry with the highest quality data in advance of scheduled licensing rounds. The Torngat 3D survey will be instrumental in assessing several amplitude variations (AVO) supported leads that were initially evaluated with our comprehensive 2D library in this region. Our combined seismic, well log and interpretation datasets provide the industry with invaluable subsurface insight.  This is critical to help identify potential source rocks, structural and stratigraphic traps and reservoirs, allowing our clients to de-risk their exploration activities and prepare them for upcoming licensing rounds,” said Kristian Johansen, CEO, TGS. 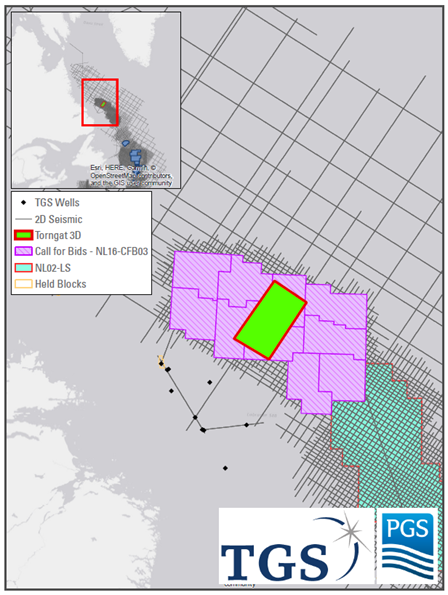