AM17 is a 40,000 km2 project in the central-southern Norwegian Sea. The project is the single largest 3D survey carried out by any company in Northern Europe and covers largely open blocks in a relatively under-explored area with limited drilling to date.  New understanding of the geological development of the area opens up a variety of play models from rotated Jurassic and Cretaceous fault blocks, to stratigraphic and structural traps in Paleocene and Cretaceous turbidite/fan deposits.  Acquisition is expected to commence in May 2017 and will continue over multiple seasons.  Data processing will be performed by TGS using its Clari-FiTM broadband technology and advanced denoise and demultiple techniques.

"The AM17 Atlantic Margin 3D is located in an under-explored but high potential area which will be strategically important as E&P companies look for new growth opportunities offshore Norway.  The project will bring much needed modern, high quality 3D seismic to this data poor frontier region. As the first new investment announced in 2017, AM17 will make an important contribution to TGS' prefunding backlog," commented Kristian Johansen, CEO for TGS. 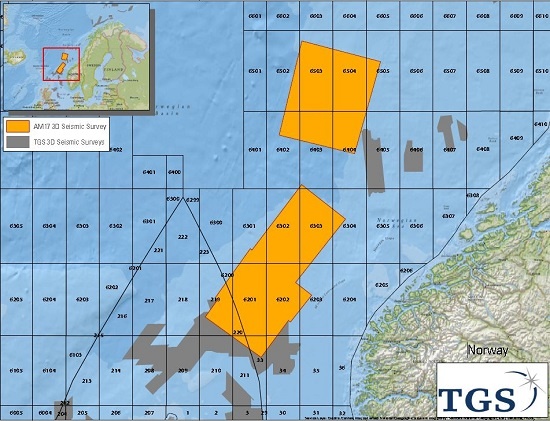