Crean 3D (CRN 3D) is a multi-client survey of more than 5,400 km2 located in the South Porcupine Basin between the Porcupine High and the Irish Mainland Platform. Multi-level targets exist, such as Paleocene and Mesozoic channel/fan systems overlying tilted fault blocks. Exploration success on the Newfoundland Labrador conjugate margin coupled with historical exploration in Atlantic Ireland has resulted in significant acreage being licensed. TGS will acquire new 3D data to provide the higher spatial resolution required to delineate multiple plays at multiple levels. Acquisition is expected to commence in June 2017. Data processing will be performed by TGS using its Clari-FiTM broadband technology.

"Crean 3D will expand TGS' modern 3D coverage in the underexplored Porcupine Basin. With the successful Atlantic Ireland license round in 2016, we see that activity across the Porcupine Basin is continuing to increase, creating exciting new opportunities. The Crean 3D survey further adds to our Atlantic Margins library which also includes data and new acquisition in the Norwegian Sea, North West Africa and Newfoundland Labrador," commented Kristian Johansen, CEO for TGS.

This survey is supported by industry funding. 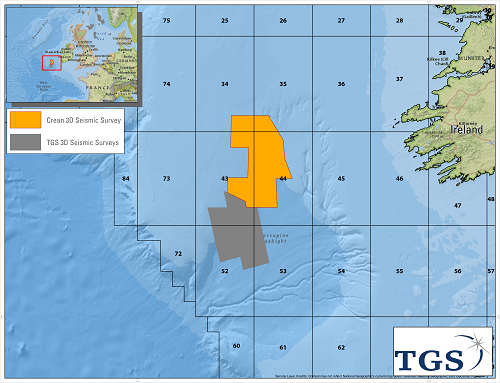