TGS announces expansion of onshore seismic library in the SCOOP/STACK

Data acquisition on Canton 3D began in Q2 2018 and Gloss Mountain 3D is scheduled to commence in Q4 2018.  These datasets will be processed by TGS utilizing its modern land imaging technology. Final data on both surveys will be available in Q2 2019 with fast track data available earlier.  Gloss Mountain 3D and Canton 3D are complemented by TGS' vast database of geological and interpretive products in the SCOOP/STACK, comprising data from over 100,000 wells and multiple interpretive products, including Basin Temperature Modeling.

The projects are supported by industry funding. 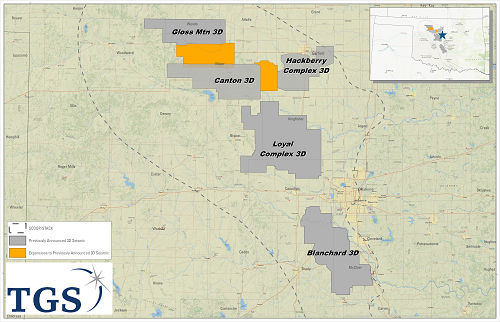