Following additional client commitments, TGS is expanding its Dawson Phase II 3D by approximately 150 km2.  The expansion is to the east of the previously announced program and extends from the province of British Columbia into Alberta. Dawson Phase II will now cover approximately 428 km2 in the prolific Montney shale formation.

Permitting on the survey has already commenced and data acquisition is expected to begin in Q3 2018. Fast track data will be available in Q1 2019, with final data available Q3 2019. This dataset will be processed by TGS utilizing its modern land imaging technology which includes delivery of shear wave data in order to enhance reservoir characterization.

"Our customers recognize the value of high quality, contiguous data sets as evidenced by TGS' success in expanding the scope of our Dawson survey in the Montney Formation of Alberta and British Columbia.  Modern seismic data is critical to help E&P companies delineate zones for horizontal drilling and multi-stage hydraulic fracturing in the Montney, which is experiencing increased drilling and pipeline infrastructure activity," commented Kristian Johansen, CEO for TGS.

The project is supported by industry funding. 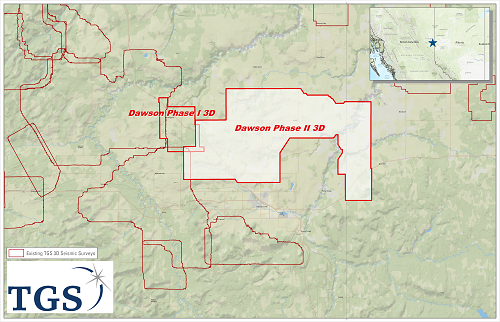