TGS is pleased to confirm that it has received a seismic permit from Mexico's Comisión Nacional de Hidrocarburos (CNH) authorizing the acquisition of a 181,500 km regional 2D seismic survey.  In addition TGS has received environmental and social resolutions.

This survey will utilize four Seabird vessels to acquire an extensive regional grid of 2D multi-client seismic with 12,000 meters offsets.  Gigante will cover the vast offshore sector of Mexico, including world class producing trends such as the Perdido fold belt and Campeche Bay, and line ties will be made in to the US Gulf of Mexico regional grids previously acquired by TGS. 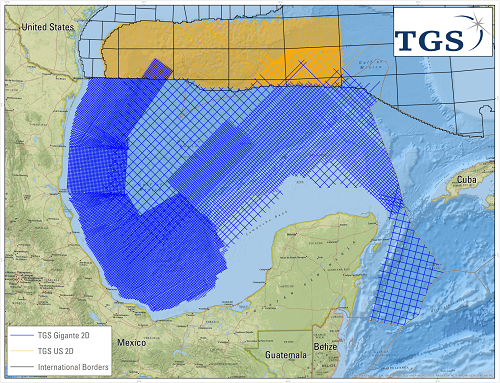 TGS will commence acquisition in Q2 2015.  Data processing will be performed by TGS with initial fast-track data available in Q3 2015. Gigante will also include gravity and magnetic data with a regional seismic structural interpretation.

"This survey will provide the industry with unprecedented continuous coverage across the rift basin, enhancing regional context and understanding of depositional systems and prospective regions. The grid ties known petroleum systems as well as vast underexplored areas of the basin as a springboard for new exploration.  TGS is pleased to be a part of history as Mexico opens its oil and gas industry to international investments," commented Robert Hobbs, CEO for TGS.