Blanchard 3D spans approximately 433 square miles over Grady and McClain counties. The survey is designed to image complex faulting and subsurface targets over the Mississippian through Devonian intervals and lies in the core of the South Central Oklahoma Oil Play (SCOOP), which targets the prolific Woodford Shale and also covers the recently announced overlying Springer Shale interval.  Recording will commence during Q1 2015 using two high channel count, wireless, vibroseis crews and will be completed by Q2 2015. Data will be processed by TGS' wholly-owned subsidiary, Arcis Seismic Solutions, with final data available to clients in Q4 2015

In addition, TGS has entered into an agreement with an oil and gas company to participate in an onshore 3D seismic project in Oklahoma.  Loyal 3D spans approximately 589 square miles over Kingfisher and Grady counties. This project is being acquired with a multi-component wireless recording system and is designed to image subsurface targets from the Late Mississippian through Ordovician.  Loyal lies in the core of the oil window targeting the prolific Meramec, Cana Woodford, Woodford Shale, and Hunton intervals within the commonly referenced STACK play fairway. Recording of this project will be complete in Q4 2014. Data processing will also be performed by Arcis and the resulting data will be exclusively owned by TGS.  Preliminary data will be available to clients by year-end 2014 with final data delivery in Q2 2015.

"TGS' entry into the Anadarko Basin is consistent with our strategy to identify prolific and high potential onshore plays where the application of seismic can deliver significant benefits to the exploration and production of hydrocarbons," stated Rod Starr, Senior VP Western Hemisphere for TGS.  "Through these two projects, TGS establishes a solid position in this new focus area with more than 1,022 square miles of high quality 3D seismic data complemented by an extensive amount of geological data."

Both projects are supported by industry funding. 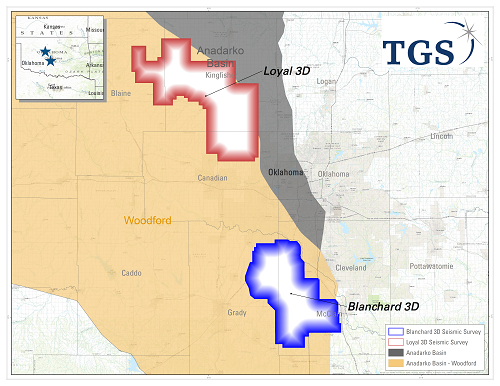