ASKER, NORWAY (8 August 2018) -TGS is pleased to announce that the purchase of the Capreolus 3D seismic survey from Polarcus has been completed. The Capreolus, full broadband 3D seismic survey is 22,130 km2 and covers two hydrocarbon provinces with proven, but underexplored, oil and gas plays both in the Beagle and Bedout sub-basins offshore north-west Australia.

Capreolus 3D includes modern 3D coverage over the Phoenix South and Roc oil and gas discoveries. In addition, Capreolus 3D also spans the Dorado-1 exploration well and Phoenix South-3 appraisal well, currently being drilled. Dorado-1 has encountered light oil in the Caley Member and gas-condensate in the Baxter Member and as of 8 August 2018, light oil has been confirmed at the deeper Crespin and Milne Members.

TGS is also pleased to announce the reprocessing of the Australian Polly 3D seismic survey and neighboring open file data. Acquired in 2013, the Polly 3D covers 7,970 km2 and ties into the adjacent Capreolus 3D survey. The Polly 3D is being reprocessed using the latest broadband PSDM techniques with reprocessed products available from November 2018. 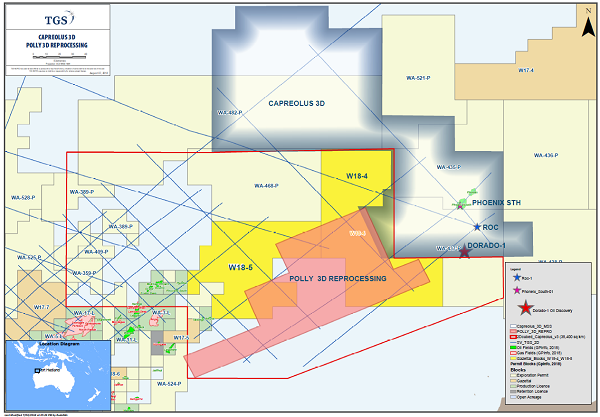