The survey, Independence WAZ 3D, continues TGS' Constitution group of WAZ projects, including Freedom, Liberty and Justice, which together total 27,622 km2 in the deep water Gulf of Mexico.

"We are pleased to extend our expansive WAZ coverage in the Gulf of Mexico. This survey, along with the other WAZ surveys within TGS' Constitution group, will help provide our clients with a clearer image of the geologically complex substructure in the prolific Mississippi Canyon region. Industry support of the new survey indicates increasing interest to explore in the region," commented Rod Starr, Senior VP Western Hemisphere for TGS.

The new seismic data is being acquired by a four-vessel WAZ fleet.  The data will be processed by TGS and preliminary products will be available to participating companies in Q4 2012 with a final processed product expected in 2013. 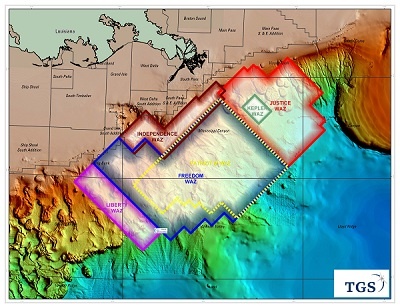