The Francisco 3D multi-client survey in the Atwater Valley area of the central Gulf of Mexico expands upon the previously announced survey.  Upon completion, the survey will total more than 6,667 km2 of seismic data in this frontier area of the Gulf of Mexico.  Data processing will be performed by TGS using Clari-FiTM technology, a proprietary broadband processing technique.   Final data will be available to clients in Q4 2014.

Pendryl, a new 3D multi-client onshore survey covering 320 km2 in Central Deep Basin in Alberta, Canada will expand TGS' existing coverage in the emerging Duvernay play.  The survey is located Southwest of Edmonton and  is designed to evaluate multiple zones from Cretaceous to Devonian, including currently producing formations such as Cardium, Glauconite, Nordegg, Pekisko and Duvernay.  The seismic data will be processed by TGS' Calgary-based subsidiary, Arcis Seismic Solutions, and final data will be available to clients late Q1 2014.

The Northeast Newfoundland Shelf 2D survey covering 5,000 km expands on the previously announced survey offshore Newfoundland.   Upon completion, the survey will cover 25,000 km in this region of prolific oil discoveries including Hibernia, Terra Nova, Hebron, White Rose and the more recent Mizzen, Harpoon and Bay du Nord discoveries.  The survey will be acquired in partnership with PGS and utilizes PGS GeoStreamer® technology.   Final data will be available to clients during Q3 2014.

All three surveys are supported by industry funding. 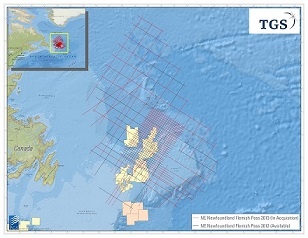 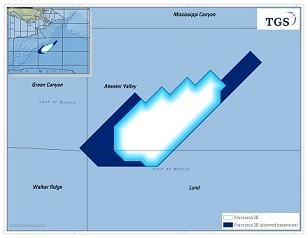